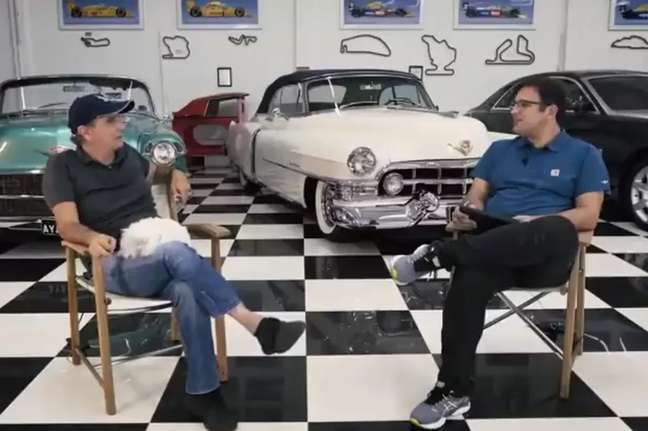 The three-time F1 champion’s positions, which were once considered authentic, are now viewed with revulsion by Formula 1 fans

Nelson Piquet, three-time world champion in Formula 1, called Lewis Hamilton, seven-time world champion, “neguinho”. The speech clearly occurred at least twice in an interview with Canal Enerto, on YouTube, and referred to an accident between Hamilton and Verstappen in the 2021 British GP. On that occasion Max ended up in hospital and Lewis won the race. . The dialogue on YouTube went like this, starting with the interviewer, and in it Piquet chooses the words:

Is Nelson Piquet racist in his individual relationships? I do not believe. He is not a guy who will go around avoiding contact with blacks. Did Piquet take a racist line? Yes sure. Does it make sense to want to “wedge Piquet” into a politically correct discourse? Not. He already said he’s “shitting” about what people think of him. Should we, as journalists specializing in Formula 1 and admirers of the three-time champion’s career, criticize Piquet for his speech? Yes sure. Because in the case of the interview with the YouTube channel, it is not a politically incorrect speech, but a racist speech. It is unacceptable, under any pretext. So simple. Racism is explicit in the interview. Therefore, he may not be racist in his individual relationships, but he is racist in thought.

One day after Nelson Piquet’s racist speech, a photo of him and his brother Geraldo came to light, affectionately hugging a black woman. But that doesn’t erase the racism in the interview. Also because Nelson Piquet didn’t call Lewis Hamilton a “little black” twice in a row in a completely natural way. The first time he thinks about it before choosing a term to refer to Lewis. He chose “negro”. Obviously the word neguinho, isolated, is not racist. But Nelson wasn’t showing affection for Lewis. Indeed, he accused him of playing dirty, of being bad and irresponsible on the track, of putting victory above any sporting ethic.

It matters little here whether Hamilton was unfair in the maneuver that took Verstappen off the track and crashed. It is possible to condemn a mistake or an attitude without resorting to racist terms. The point is that a three-time champion driver chose the word “neguinho” to refer to a seven-time champion who happened to be vying for a position against his daughter’s boyfriend Kelly Piquet.

I try to understand why Nelson Piquet wants to make this pitiful side of him explicit. In his mind, calling Hamilton a “nigger” twice doesn’t mean racism, but he knows he’s taking a stand against an activism that apparently annoys him. Nelson has already given dozens of proofs that he doesn’t want to be framed in his way of speaking. Perhaps that is why he defends Bolsonarism with all his conviction. He was also willing to drive the presidential car in a parade in Brasilia. He knew he would be called a “fascist driver”, as he was, and he probably wasn’t afraid of being called a “racist”, as he is.

Despite all the negative repercussions from around the world, including the Formula 1 organization, Mercedes and Lewis Hamilton himself, the three-time world champion did not respond via his Twitter profile. As if Piquet, he doesn’t give a shit what people think of him. But the fact is, men like Lewis Hamilton annoy men like Nelson Piquet, who don’t accept the harm that certain customs do to innocent people. Therefore, they refuse to evolve as social subjects, not only by accepting, but by promoting inclusion and diversity.

Lewis Hamilton, rather than being one of the very rare blacks to have taken the place of driver in the history of Formula 1, and the only world champion, annoys many people, especially champions of other eras, because of his identity activism. Hamilton wants to be more than just a driver, while Verstappen is happy to be one of the best drivers of his time, as was Piquet in the 1980s and early 1990s. The reason that led Nelson to choose the term “little black” to refer to Lewis.

After all, Nelson Piquet is known for his sincerity. He has always been far more authentic than Ayrton Senna, who has chosen his words of him carefully, and Emerson Fittipaldi, a master in the art of public relations. For this reason, Piquet has collected stories in which he mistreated a reporter or was irritated by a question he considered bad. Okay, Nelson has a right to be like that. But it’s a lie that he doesn’t like journalists. Like Yes. Piquet likes journalists who accept his sharp words, perhaps prejudiced or even racist, who never challenge him, because he has learned to be a master of communication in his own way.

In calling, by choosing to call “neguinho”, twice, a sports monument like Sir Lewis Carl Davidson Hamilton, knight of the British Crown and seven times F1 world champion – when it would be natural to call him Lewis, because in the environment of Formula 1 ALL are based on the name – Piquet wanted to cause controversy.

Once again he sent a message: everyone has the “freedom” to be as they want. For Bolsonarism, of which he is a faithful follower and spokesperson when necessary, the word “freedom” is used in a partial way, to justify all the wrong things, such as attacking democracy, being prevented, preventing the legal abortion of a raped child. at the age of 9 and even committing racist talk.

Therefore, while not racist in his individual or even collective relationships, Nelson Piquet has explicit structural racism in his speech. And this is the point that we F1 journalists have to criticize. Fuck if he has millions of fans. Fuck if he never does an interview again. By insisting on racist terminology, even if not understood as racist, Piquet advocates structural racism, since he is often not even perceived by those who practice it. I hope Nelson Piquet takes an examination of conscience after the terrible backlash of his words.

Cologne received the Schalkethis Sunday, and came...
Previous articleHas Instagram crashed? Users Report Issues This Tuesday (28)
Next articleThe parliamentarian opens the investigation to investigate allegations of harassment by the president of Caixa