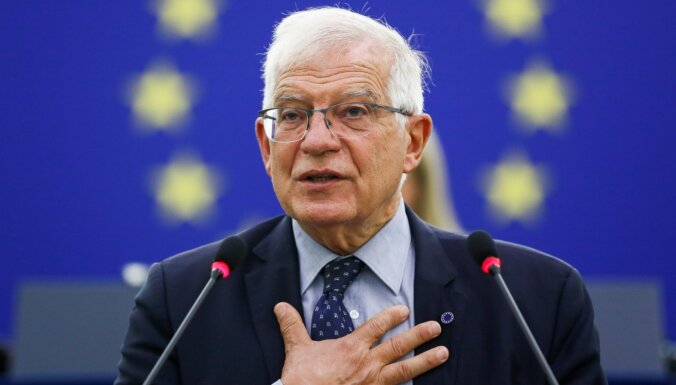 European countries should consider seizing the frozen assets of the Russian Central Bank and using them to rebuild Ukraine after the war, it said in a statement. interview Financial Times, published Monday, May 9, EU High Representative for Foreign Affairs and Security Policy Josep Borrell.

“I’m very supportive of this, because this step makes absolutely sense,” the diplomat said. As an example, he cited the situation of the assets of the Central Bank of Afghanistan frozen in the United States. In February this year, billions of dollars were seized for potential aid to victims of terrorism and humanitarian aid to the Afghan people. “It would be logical to consider similar actions with Russian reserves. We have money in our pockets, and someone should explain to me why it can be done with Afghan money and not with Russian money”. European countries have not yet taken any steps in this direction, notes the FT.

According to US Treasury Secretary Janet Yellen, the question of whether Russian money could be used to restore Ukraine should not be taken lightly, because it requires a change in US law and it cannot be done that “in coordination with the allies”, writes the FT .

Josep Borrell underlined that the issue of financing the restoration of Ukraine is one of the key issues on the agenda. This will require “an incredible amount of money”, and the main burden will fall on EU countries. The amounts raised at donor conferences are a drop in the ocean, as rebuilding Ukraine will cost hundreds of billions of euros, Borrell said.

US President Joe Biden had previously offered to sell the assets of Russian billionaires and use the proceeds, the FT recalls. This idea was supported last week by the President of the European Council, Charles Michel. Now, writes the newspaper, European Commission officials are studying legal means to implement it.

Hundreds of billions for the restoration of Ukraine

Ukrainian President Volodymyr Zelensky and Prime Minister Denys Shmyhal have estimated the cost of rebuilding Ukraine’s economy and infrastructure after the Russian invasion at $600 billion. Ukraine’s First Deputy Economy Minister Denis Kudin said that Kyiv, together with Western partners, is already developing a mechanism to use $415 billion from the frozen assets of the Russian Central Bank for these purposes. .

Before the war, Russia accumulated a record US$643 billion in Central Bank gold and currency reserves. According to Western analysts, as part of the sanctions for the invasion of Ukraine, about two-thirds of this amount was frozen. Russian Finance Minister Anton Siluanov said about $300 billion had been frozen.