Russian media claim that inflation in the country is lower than in Europe. Is it true ? 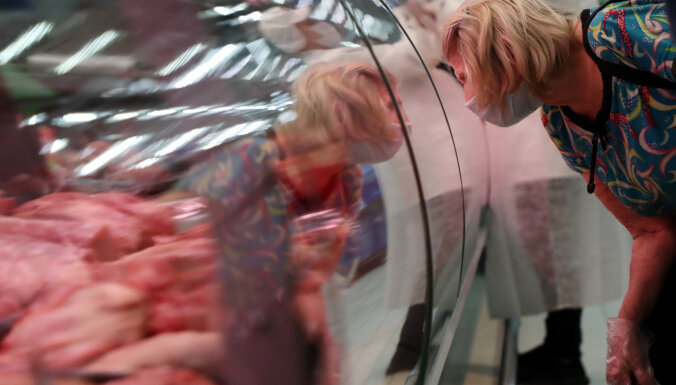 The “total shortage” of food, water and wine in France and the dim lights on the streets of German cities – this is how Russian channels describe record price increases in Europe. Following President Vladimir Putin, the pro-Kremlin media claim that in Russia, on the contrary, all is calm: prices have stopped rising, but there is no shortage. Is the price rise situation really worse in Europe than in Russia?

“The French are no longer up to wine. Faced with the threat of a total shortage of food and water, the authorities have banned the watering of lawns, gardens and private gardens. Farewell, cucumbers and tomatoes our own backyard, given unprecedented inflation, fuel and power shortages, the main French question now is how to survive? – this is how the correspondent of the TV channel Natalya Ivanova describes the food problems of France in the report of Ren-TV. His voice is heard against a background of shots of green fields and beds of cucumbers and tomatoes.

The story was released on May 14 and describes the food problems France is facing due to drought – the country has indeed experienced a lack of rainfall in recent months.

The story, just over three minutes long, underscores in every possible way that the cause is not just the drought, but also the sanctions imposed on Russia. All together – sanctions and drought – can even lead to famine in the country, say the authors of the story.

The day before, Friday May 13, President Vladimir Putin held a meeting on the situation of the Russian economy. True, the meeting began with accusations against Western countries, which, in the opinion of the Russian president, are creating a crisis by imposing sanctions.

“Their perpetrators, guided by short-sighted and exaggerated political ambitions, Russophobia, have further damaged their own national interests, their own economies, the well-being of their citizens. We see this mainly in the sharp increase in inflation in Europe, in some countries it has already approached 20% per year, and in the euro zone as a whole, commodity prices have increased by more than 11%,” Putin said.

He went on to detail how, in his opinion, the Russian economy is coping well with the crisis: Russian companies are replacing Western companies that have left, Russian wheat is producing record crops and inflation in April has slowed several times compared to to March.

The president’s rhetoric was also picked up by Russian media, which spoke of the rapid impoverishment of people in Western countries and the disappearance of goods from stores.

On Sunday, Channel One, for example, aired a story about “lights out” in Germany: the story says that due to sanctions and rising energy prices in some cities across the country, the street lights are on until half an hour later. .

“Due to record inflation – in April it reached 7.5%, five times more than last year, Europeans are now saving even on food and watching in bewilderment at news reports from Russia on the life under sanctions,” the television correspondent said.

In most stories, the emphasis is on the fact that in Russia, despite the sanctions, the situation is stable: prices have stopped rising, the ruble is strengthening, and there is no shortage of goods in stores.

The BBC Russian Service explains what is wrong with the rhetoric of the Russian President and state media broadcasting on inflation in the EU and Russia.

Is inflation in the EU really higher than in Russia?

For EU countries, Eurostat considers the index not of ordinary inflation, but of harmonized inflation. This makes it easier to compare inflation across European countries, as each has its own characteristics, for example different consumption baskets or different rural and urban population shares.

In Russia, they consider ordinary inflation, and in April it was much higher than in all the countries of the euro zone or, for example, in Germany, where they would have saved on street lighting – 17, 8%.

Inflation in Russia has quite “approached 20% per year”, as Vladimir Putin said of some European countries. In April 2021, it was also several times lower – 5.5%.

There is a country in the euro zone which had higher inflation in April than Russia, it is Estonia. There, prices rose by 19%.

In France, which Russian media said was almost on the brink of starvation, prices in April rose 5.4% in annual terms – about the same level as a year ago in Russia.

Why are the prices rising?

Inflation in many countries around the world is truly setting long-term records. But that process didn’t start in February 2022, when Russia attacked Ukraine and Western countries began imposing sanctions, but at least six months earlier.

In 2021, the coronavirus pandemic began to decline, states began to abandon quarantine – their residents began to go to restaurants and bars, buy clothes and travel again.

However, it turned out that the world economy was not very ready for this: there were not enough goods in the stores, and the prices for these goods rose.

This is due to the disruption of supply chains caused by the pandemic – factories or work in agricultural production have been stopped due to the quarantine.

As a result, in 2021 it turned out that the world economy lacked many things, for example chips for the production of cars and electronics, raw materials for packaging or containers. This deficit triggered the process of rising prices on world markets. It also led to a sharp rise in prices in Russia in the fall of 2021.

The reason is that European countries emptied their gas storages during the cold winter of 2020-2021, and Gazprom did not provide them with enough gas to fill these storages. It also led to a new wave of inflation.

Russia’s attack on Ukraine and the sanctions only exacerbated these trends: food and energy supplies began to grow faster.

High inflation in Europe is mainly due to rising prices for fuels and energy products, says Alexei Devyatov, chief economist at Uralsib. He points out that the situation is now aggravated by, for example, the refusal of Russian gas by certain countries.

Higher inflation in the Baltic countries and, for example, in the Czech Republic, Sofya Donets, chief economist of the Russian bank Renaissance Capital, explains that they are more dependent on fuel and food supplies from abroad, and also that the population of these countries is poorer – the share of products in their food basket is higher.

The International Monetary Fund compares the consequences of a war to an earthquake: the waves coming from the epicenter diverge widely in the markets of raw materials and cause a rise in the prices of foodstuffs and energy. According to the report, the low-income population will be the first to suffer.

Has inflation in Russia really slowed down?

If Europe suffers the consequences of an “earthquake”, then Russia has found itself at its very epicenter.

In late February and early March, Russians began to massively withdraw currency from banks and buy various goods in stores. There were complaints of shortages of sugar, tampons or pet food, panicked by people buying faster than stores could supply. This rush in demand thus led to a sharp rise in prices in March.

In April, the population got used to it and reduced their “hysterical” purchases, on the contrary – many tightened their belts, not knowing what would happen next. Inflation has really started to slow down.

“First Wave [повышения инфляции в России] is declining, the question is whether there will be a second wave, and if so, whether it will be pronounced, – says Stanislav Murashov, an economist at Raiffeisenbank, in an interview with the BBC. “With consumer demand weakening and the rouble strengthening, even given the extraordinary conditions, inflation should stabilize.”

Murashov, however, does not exclude a second wave of price growth: it will begin when the stocks of goods run out, and new deliveries will already go through parallel imports, that is, the goods will not be supplied by the manufacturers, but by various intermediaries.

“We do not see a recovery in import volumes. A shortage may arise for a number of goods, their prices will rise and we may get an acceleration of inflation for them,” predicts Alexei Devyatov.

The central bank calls the process economists speak of a restructuring of the country’s economy: companies seek new suppliers of goods, and until new supply chains are established, prices will rise.

The bank expects inflation to continue to rise this year and reach 18-20% by the end of the year. The Ministry of Economic Development of the Russian Federation predicts, as reported by Russian media, that inflation this year will be 17.5%.

“At the end of the summer, inflation in annual terms, according to our calculations, will be over 20%,” says Donets. Then, she says, will decline. However, a sharp decline in annual rates is possible only in March next year, Donets points out.

The forecasts for the euro zone are quite different. The European Commission, for example, expects inflation to reach 6.1% in 2022 and then 2.7% in 2023.