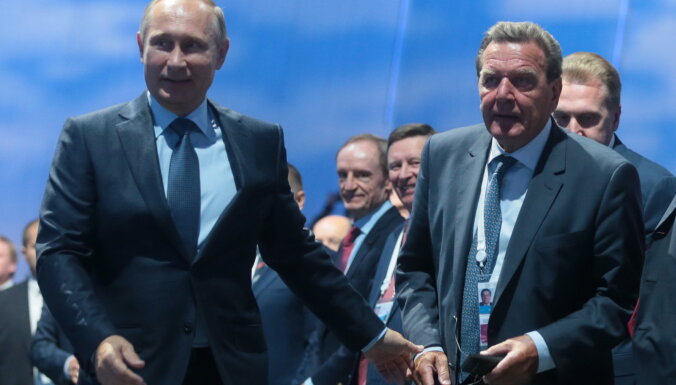 Former German Chancellor Gerhard Schroeder and CEO of Nord Stream 2 AG (Nord Stream 2 operator) Matthias Warnig have announced the impossibility of extending their powers to Rosneft’s board of directors. Warnig is not a public figure, but Schroeder has come under fire in recent months for his stance on Russia and the Russian invasion of Ukraine.

Russia’s biggest oil company said it “understands” her decision and thanked her for her “unwavering support”.

Rosneft spokesman Mikhail Leontiev declined to speak to the BBC about it. “I will not make any comment to you. Who are you to make me comment? – he said.

On February 22, German authorities – two days before the Russian invasion of Ukraine – suspended the Nord Stream 2 certification process, and US President Joe Biden decided to impose sanctions against Nord Stream 2 AG and its leaders.

Until November 2005, Schroeder was Federal Chancellor of Germany. Warnig is a businessman, he avoids publicity, but German media reported that he served in the Stasi, the GDR’s state security service. At that time, according to publications, he got to know Russian President Vladimir Putin, who was in the GDR through the KGB. Warnig made no secret of his knowledge of Putin.

Since the start of the Russian invasion of Ukraine, Schroeder has been criticized for his ties to Russia and Putin. The day before, on May 19, the deputies of the European Parliament adopted a resolution (of a declaratory nature) asking that sanctions be taken against Schroeder, since he did not leave the board of directors of Rosneft.

He said the German parliament’s decision to strip Schroeder of his taxpayer-paid office space in Berlin was the right thing to do, and he doesn’t think “nothing else is needed at the moment.”

Schroeder lost the office of the Bundestag, which was due to him as a former chancellor. The parliamentary budget committee decided to reduce the corresponding expenditure item after the ruling majority in the Bundestag came to the conclusion that Schroeder no longer fulfilled his obligations as a former head of government, DW reported.

Employees of Schroeder’s office, as reported, in March refused to work with the former chancellor in protest at his stance on Russia and were transferred to other positions within the Bundestag apparatus. The collaboration with Schroeder was also cut short by his speechwriter, who had worked with him for 20 years.

In March, Schroeder was forced to relinquish the title of honorary citizen of his hometown of Hanover. He also had to step down from the board of local football club Hannover 96, which wanted to break with the former chancellor over his stance on Ukraine.

“They are not dealing with an aggressor, a warmonger like Putin. As far as the former chancellor is concerned, we never talk about a completely private life. Especially in a situation like the one we are currently experiencing,” said said Lars, co-chairman of the ruling German Social Democratic Party, was quoted by DW Klingbeil. Schroeder has not responded to criticism, and the SPD already has 14 statements calling for his expulsion from the party, the newspaper notes.

At the end of April, in an interview with the New York Times, Schroeder asserted that “a country like Russia cannot be isolated in the long term, neither politically nor economically” https://rus.delfi.lv/biznes/economy/. “German industry needs raw materials that Russia has. It is not only oil and gas, but also rare earths. And these are raw materials that cannot simply be replaced,” he said.

Before the war, answering a question about friendship with Putin, Schroeder said: “Friendship means that you express your point of view to each other and you can criticize each other. But that is not done not in public, but in private.”

And Putin told how he went to the bathhouse with Schroeder: “We were once at my house, many years ago, and we went to the bathhouse, and he caught fire. He just helped himself a beer, I go out and say: Gerhard, we have to get out of here, we’re on fire. And he answers: I’m going to finish my beer now and let’s go.”

Previous articleAfter the death of a biker, a criminal case was opened against the border guard
Next articleGeneral Staff of the Armed Forces of Ukraine: Russia is trying to break through the defenses of Donbass