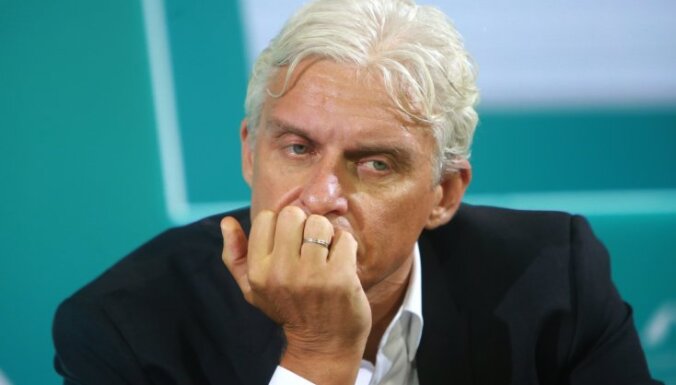 Vladimir Potanin’s Interros group is buying a 35% stake in TCS Group Holding, the parent structure of the Russian group Tinkoff, from Oleg Tinkov’s family. The Bank of Russia approved the deal, its parameters were not disclosed.

Oleg Tinkov built a financial group centered on Tinkoff Bank for more than 15 years. Tinkoff is one of the three largest banks in Russia by the number of active customers and has a leading position in the field of fintech. It is the first Russian bank to operate completely online.

Oleg Tinkov’s willingness to completely withdraw from Russian assets was reported by the media the penultimate week.

The businessman wants to distance himself from the group as much as possible in order to minimize the risk of sanctions for it, writes Kommersant. According to the publication, 35% of the TCS group controlled by the Tinkov family can be sold for much less than market value.

“I am proud that together with my team, I have built the best bank in the country from scratch. The consensus in our industry is the best digital bank in the world and based in Russia. Now is the time to retire and to take care of health and family,” Tinkov said in a statement published on the Interros telegram channel.

On April 19, London-based Oleg Tinkov spoke out in strong terms against Russia’s war with Ukraine and those who support it, and also criticized the Russian military. The banker turned out to be one of the few representatives of Russia’s business elite who allowed himself to go against the grain of President Vladimir Putin.

Tinkoff Bank has been in trouble over the past few weeks: its shares have fallen, management has left the bank and media reports that the bank’s founder, Oleg Tinkov, was ready to sell his stake at a steep discount.

Tinkov, after whom the bank is named, has taken an anti-war stance since Russia’s attack on Ukraine. But on April 19, he expressed himself with particular sharpness: on his Instagram he called the war crazy, the Russian army – shit, and the people who draw the letter Z – morons. Russian businessmen did not allow themselves such harsh statements.

On the same day, the bank announced that it would change its name this year. In the bank’s telegram channel, Oleg Tinkov wished “good luck and a speedy recovery.”

A few years ago, Tinkov was diagnosed with blood cancer. In 2020, Tinkov left the position of head of the bank’s board of directors, explaining this by a desire to focus on his health.

Since then, he has been looking for a buyer for the bank. In 2020, it was officially announced that Yandex completely bought the bank. Then the Russian IT company was going to compete with Sberbank in the field of creating ecosystems – services for receiving various services on the Internet.

However, this deal did not happen, later The Bell published a letter from Oleg Tinkov to employees, which said that the bank was not for sale, and the businessman described Yandex with the same expression he described the state of the Russian army in 2022. He also denied rumors about the possible sale of MTS Bank.

In 2021 Tinkov and his family ceased to be the majority shareholders of the bank. Then they converted class B shares (each of which gives 10 votes) into common shares. Because of this operation, its stake in the bank fell to 35%, which has just been sold to Interros.

After Tinkov’s April anti-war statement, photos with cut bank cards appeared on the networks – they made the letters V and Z. The media reported that co-directors Oliver Hughes and Pavel Fedorov left the company, and Tinkov himself was looking for a buyer to protect the bank from sanctions. He was on the UK sanctions list.

After that, the bank papers collapsed. But as soon as we became aware of the agreement with Interros, the bank again increased its prices: the bank’s securities on the Moscow Stock Exchange rose by more than 7% on Thursday evening.

“We believe that the agreement with Interros opens a new page in the history of the Tinkoff group”, commented Stanislav Bliznyuk, chairman of the board of directors of Tinkoff. “The new shareholder wishes to maintain the high performance of the group, its talented management team and the unique DNA of Tinkoff”, which has always been guided by the customer-first approach. Our management remains committed to the values ​​of Tinkoff and is motivated for the long-term development of the group’s activities, the continued growth of its capitalization,” he said.

Interros, as a long-term financial investor, is interested in seeing the Tinkoff group continue to occupy a leading position in the Russian banking market, also indicates Vladimir Potanin.

For Vladimir Potanin’s company, the purchase of Tinkov shares was already the second M&A operation on the Russian financial market in April. Earlier this month, Interros bought a stake in French banking group Societe Generale from Rosbank. Details of the deal were not disclosed.

Scorer of the winning goal against Switzerland, Casemiro exalts his opponents and celebrates the standings: “Boring group”

Who can face Brazil in the round of 16 of the World Cup?

Three Israeli soldiers arrested on suspicion of revenge against Palestinians

Previous articleFraudsters defrauded Luminor customers of 20,000 euros in April
Next articleThey have started a collection for the polo player son of the Golden Triplet: they are looking to raise 800 thousand dollars