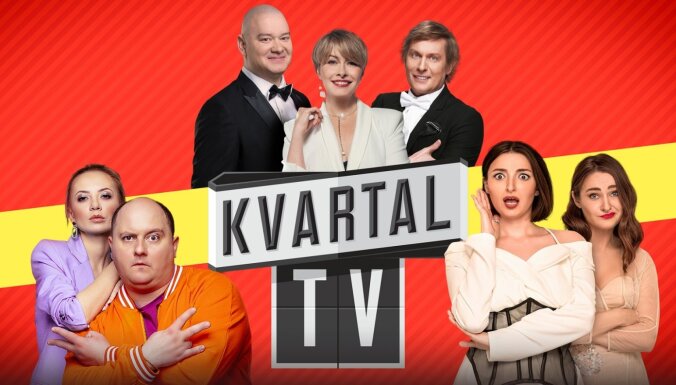 Since August 1, the Ukrainian television channel Kvartal TV has been accessible to Latvian viewers. The channel is supported and included in their basic packages by the largest Latvian cable operators: Baltcom, TET, Balticom, Telenet, Netvison, Starnet, Elekotron&K, Megogo and Skatvis. “Kvartal TV” is a 24-hour television channel.

“Quarter TV” is known for the popular shows “Evening Quarter”, “Women’s Quarter”, “League of Laughter”, “Laugh the Comedian” with the participation of Ukrainian comedians from the studio “Kvartal 95”. It was they who also created the popular TV series “Servant of the People” and “Matchmakers”.

Comedy show “Evening Quarter” is considered the number one entertainment program in Ukraine. At one time it was created by humorist friends and former KVN players from the Kvartal 95 studio.

“We continue to express our unity with the people of Ukraine and regularly expand the range of channels available to Latvian viewers. Therefore, we are pleased that one of Ukraine’s most popular TV channels is now available to TV viewers. viewers of Tet,” said the director of the department of television and entertainment services of the Tet television operator ” Inga Alika-Stroda. – The reflection of the news through the prism of humor and satire, which dominates the channel’s content, will allow you to watch everyday life from a different point of view and will be a great addition to the already extensive set of TV channels.”

“It is important for us to offer high quality and diverse content. This became especially important after the ban on Russian channels, so now we are actively working on our TV content so that in the near future our customers will have access to a wide range of programs for a variety of interests and tastes. We are pleased that from August 1 we can offer our subscribers the Kvartal TV channel, which offers high-quality entertainment content in Russian » , comments Dmitry Nikitin, director of Baltcom.

Kvartal TV was founded in 2016. Its content is aimed at a wide audience – women and men aged 18-50+. The channel’s program consists of entertainment shows, comedies, feature films, soap operas, cartoons and special projects from the Kvartal 95 studio.

The world champion of jiu-jitsu Leandro Pereira...
Previous articleIn July, investigations into two cases of fake Covid-19 certificates were completed
Next articleEscalation in Nagorno-Karabakh: What is happening and why it matters