Two hours of pure delight. Faster Than a Bullet starring Brad Pitt is out 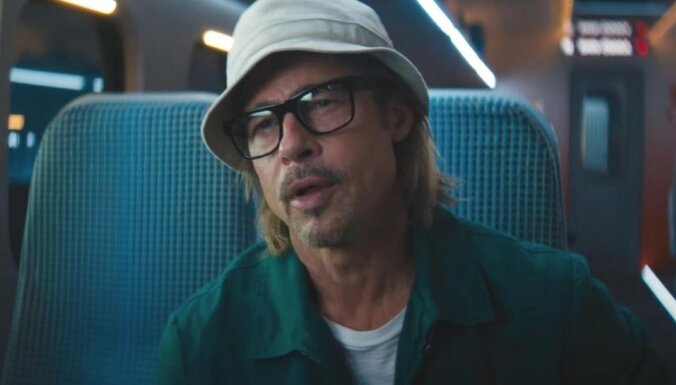 In Latvian cinemas, the screening of “Faster Bullet” (Bullet Train) – “kawaii” action film by director David Litchi has started. And these two and a quarter hours, during which the high-speed train travels from Tokyo to Kyoto, are pure delight.

Ladybug (Brad Pitt), a weary killer with a panama hat and smart glasses, walks through Tokyo at night to the train station. Using headphones, he talks to his mistress, Maria (Sandra Bullock), who gives him clear instructions. Take the “Tokyo-Kyoto” bullet train, take a suitcase with money, get off at the first station. This is a “prize” for easy work after a series of failures that fell on Ladybug’s fate. However, the train is filled with all kinds of murderers and criminals.

First, the suitcase belongs to two professional hitmen – Lemon (Brian Tyree Henry) and Mandarin (Aaron Taylor-Johnson), who are referred to as “twins”, despite one of them being white, the other African- American. In the suitcase is a ransom for the son of one of the big businessmen, whom they have already freed, so they did not need the money. Second, a high school student in pink named Prince (Joey King) goes to first class. She looks like an ordinary teenager, but in reality, she’s a dangerous psychopath who pushed the son of Japanese assassin Kimura (Andrew Koji) off the roof. Now the child is in the hospital and Kimura wants revenge. Third, at one of the stations, the Latin Wolf (Benito A. Martinez Ocasio) enters the train, who also wants to pay for the death of the bride. And that’s without counting a deadly snake crawling out of its cage, the bite of which is enough to bring tears of blood from the victim’s eyes. Somehow, Ladybug finds herself at the epicenter of masterful shootouts, stabbings, and other bloody choreographies staged by assorted passengers.

By the way, about the action. The film is directed by David Leitch (“Blast Blonde”, “Deadpool”), who was Pitt’s stunt double and Jean-Claude Van Damme’s twice. So Litch knows the “material” perfectly. This is the case when the director’s hand is like the hand of God. It’s no coincidence that Leitch has strived to create such powerful action dramas as The Bourne Ultimatum and John Wick (along with fellow stuntman Chad Stahelski, he made his directorial debut in 2014, but is not listed in the credits).

Apart from the fact that Faster than a Bullet is an excellent action film, it is also a super-comedy, the stylistic decision of which refers to the films of Guy Ritchie, when the characters are presented with static frames with their names. A scene from the finale is literally filmed from the perspective of a water bottle. There’s a joke about a Japanese “smart” toilet by Pitt, although it’s kinda 1980s. cute. Lemon, for example, is a fan of “Thomas the Tank Engine” and classifies everyone around him as the heroes of this cartoon by sticking stickers on their foreheads. The wolf cleans his golden-heeled boots before every next case. And the leader of the Russian yakuza killers White Death (Michael Shannon) has domes on his chest.

The icing on the cake is of course the excellent performance of Pitt who uses his charm to the full. The bottom line is that this marvelous performance doesn’t become his swansong – Pitt has often talked about ending his career lately. Because it seems that the actor has just entered his most golden period.

“Bold complexity is a point that takes precedence over realism or narrative purpose. The high-speed train will drive you forward through sheer verve and audacity” (Bilge Ebury, New York magazine)

“The manic energy of the high-speed train eventually wears off because that’s the whole movie. And then there’s Pitt. His charm alone does wonders for the movie, elevating it to at least the level of ‘watchable’.” (Jay Coyle, Associated Press)

Faster than a Bullet finds the perfect balance. Pitt does what he does best in the action genre, combining unmistakable masculinity with witty comedic flair (thanks to a poignant script). Those looking for rough humor similar to “Snatch” will get it” (Lee McCoy, Drum Dums)

The world champion of jiu-jitsu Leandro Pereira...
Previous articleKrasnodar – Lokomotiv: where and at what time to watch the broadcast of the match of the 4th round of RPL
Next articleCompanies that embrace diversity go further