State Police Reporting Through May 9: Some Residents Lay Flowers, Everything Under Control 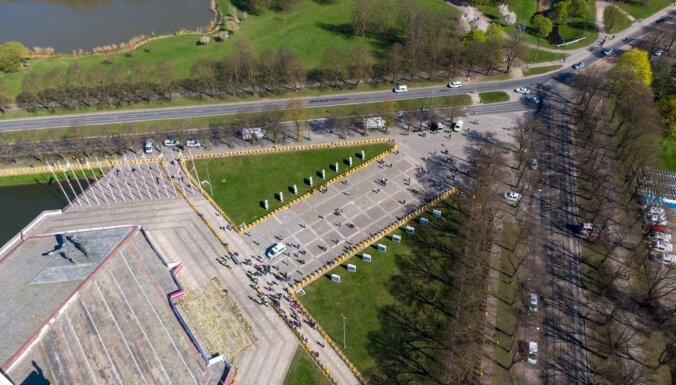 According to state police, between 7:30 a.m. and 10:30 a.m., about 300 people visited the monument in Victory Park. In Riga and elsewhere in the country, people individually lay flowers at memorials, but the police control the flow. The state police again urged residents to refrain from visiting the Victory Park monument in Riga.

The State Police report that isolated cases have been recorded when people went to the monument in Victory Park with a St. George ribbon attached to their clothing (the use of this symbol is prohibited). Someone tried to play the Russian anthem through the loudspeaker. A man was also seen wearing a jacket with pinned medals. Following negotiations with the police, medals bearing prohibited symbols were removed.

On May 9, the police also pay close attention to what is happening in the microdistricts of Riga. In Kengarags, law enforcement officers stopped a car with a V-shaped St. George ribbon attached. The ribbon was removed and proceedings were initiated for an administrative offense related to the use symbols glorifying military aggression and war crimes.

According to the inventory, two people were delivered to the police station at 11 a.m. A woman for refusing to remove her St. George ribbon. And a certain person – to be in a public place in a state of intoxication and petty hooliganism.

The State Police once again reminds that today special attention is paid to the use of prohibited symbols – stylized clothes like military uniforms, ribbons of St. George, V and Z symbols. The use of the Russian flag is also prohibited.

This morning – even before 7:00 a.m. – a monument was damaged in Liepaja, okupanti (“occupiers”) was written on the memorial. On this fact, a criminal trial was opened, the circumstances of the case are being clarified, report the police.

The state police also call for restraint on those who want to express their negative attitude towards the policies of the Russian regime. Law enforcement is urging residents not to engage in thuggish and provocative activities, not to damage property. “In Latvia, as in a democratic state, there is an established order and laws. The police will have to respond to such cases. The state police call for refraining from this type of provocation,” the Facebook account reads. of the state police.