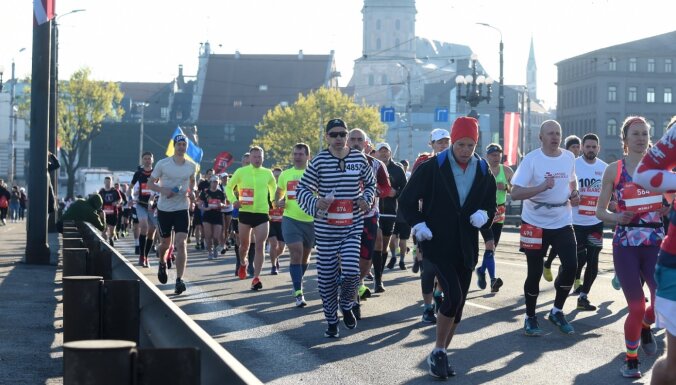 Marathons in Riga have been held since 1991. This year the Riga Marathon was held for the 32nd time.

The Rimi Riga Marathon program traditionally consisted of two days. On Saturday, May 14, children’s day was held, 3,500 children took part. The young runners started and finished near the Liberty Monument.

The participants of the marathon started on the quay on November 11, then the distance passed along the stone bridge, Ranka Dambis, Daugavgrīvas street, Slokas street, along Kipsala, Balasta dambis, along Kliversala, Mukusalas street, Island Bridge, Krasta Quay, again along Stone Bridge and second circle to Pardaugava, then along Vantu Bridge, Brivibas Street, Sencu Street, Skanstes Street, Elizabetes Street, Exporta Street and end on the Quai du 11 Novembre. During the marathon, traffic on some streets was blocked.

1928 foreign runners participated in the marathon. The largest number of runners was represented by Latvia, Germany, Lithuania, Estonia, Great Britain, Spain, Ukraine, Sweden, Poland and France. Athletes from Russia and Belarus were denied registration for the Riga Marathon.

Ethiopian Deribe Robi Melka crossed the finish line in two hours 12 minutes and seven seconds and became the winner of the Riga Marathon. Second place was taken by Kenyan Michael Njeng Kunjuga, who lost 53 seconds to the winner. The leading trio was closed by another Kenyan runner, Duncan Kash, who lost 4 seconds to Kunjuga.

Previous articlePantsuits, moccasins and caps: what to buy during the off-season sales
Next articleUN: War in Ukraine could lead to food shortages in the world