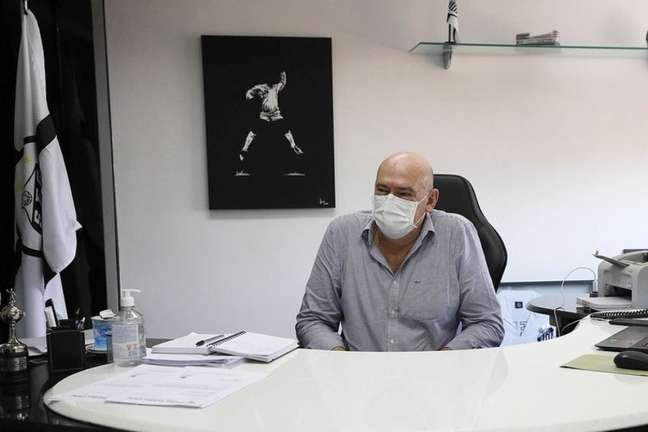 Santos’ day after the tough 4-0 defeat against Corinthans at the Neo Química Arena for the first leg of the Copa do Brasil was full of controversy. Santos players were not at all happy with the strong statements made by manager Fabián Bustos after the defeat. President Andres Rueda went to CT Rei Pele.

According to LANCE! / DIÁRIO DO PEIXE, athletes understand that scolding and heat in the locker room are normal, especially after a defeat as it was. But, by exposing the problems as the manager did, he pits the audience against the team and their work.

– I had to change them all. They were all bad. Except Marcos Leonardo, Braga a little … João Paulo, who was not to blame. I had to change them all. Among those who had added minutes, we had to think that on Saturday we played again. Ângelo and Bruno would have gone in, but Zanocelo would not have gone out. It was to create more game. We tried to run a little more, ”Bustos said.

Santos president Andres Rueda attended CT Rei Pele this morning to speak with the team and try to understand the defeat. Santos management does not want the atmosphere at the club to be “unsustainable”, but expects a quick reaction not to experience a scenario similar to last year.

The apathy of the players in the classic against Corinthians attracted attention. The football executive, Edu Dracena, had a conversation with the cast while he was still at the Neo Química Arena and asked for an immediate reaction. This Thursday Rueda has reinforced the chorus and expects a change of attitude in the next game.

– We’ve already talked a bit here in the locker room. Of course, if I came in now and gave the biggest scolding, it would be kicking a dead dog. I said a few things that the players needed to hear. Everyone, technical staff. Now, we need to react as quickly as possible. The players who are here have already shown potential. On Saturday we have the opportunity to face the same rival again to turn things around. It is up to these players to change our posture and behavior – Edu said after the game.

But the allegations aren’t just about the cast and Bustos. Some club advisors criticized Andres Rueda’s management and the football department. The main questions are in the signings: the vast majority of reinforcements who have arrived or were not even on the pitch, such as Ricardo Goulart and Auro.

The Management Committee asked why Bustos did not change sides at half-time, with a 3-0 defeat. Furthermore, LANCE! / DIÁRIO heard from the members of the GC that “Saturday the group must demonstrate that they have the strength to get back on their feet in adversity”.

Next Saturday, Santos will face Corinthians again, this time for the Brazilian championship, again at the Neo Química Arena, in Sao Paulo. Santos are in 8th place in the national competition, with 18 points. The Parque São Jorge team is the runner-up in the competition.

Former US President Donald Trump knew his...
Previous articleRailways are calling for readjustments of up to 19% and permanent triggers on diesel
Next articleIn Manaus, the social martial arts project monitors the physical and behavioral evolution of students