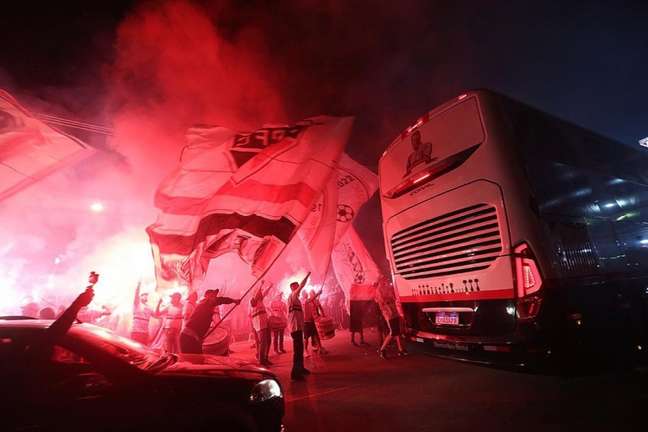 With over 38,000 fans in attendance, the party followed Ceni’s team from start to finish.

Despite last Monday’s negative result (20), the fans of St. Paul he was very excited this Thursday (23), in the second classic of the week against Palmeiras, this time valid for the Copa do Brasil, and he helped lead the team to victory, with celebrations from start to finish.

About two hours before the game, the organized audience of the Independent was already at the door of the Morumbi stadium with the right to drums and firecrackers. Something that didn’t happen on Monday (20). The fans proved that even with the negative record, support for Rogério Ceni and his team still existed.

The welcome of the buses that brought the delegations mixed provocations aimed at the alviverde team, with shouts of “no World Cup”, and party and pyrotechnics with the arrival of the Tricolor.

Within Morumbi, the attitude was similar. From the very first minutes, the crowd did not stop singing for a minute. The stands seemed much busier than in the last match. Every move and every move received cheers.

The names of Calleri, Luciano and Rogério Ceni are also very muffled. After the first goal, scored by Patrick in the 31st minute, the party intensified. The cell phone flashlights were on, the chants got louder.

Also in the first half, a move attracts attention with Palmeiras reserves. At a certain point, towards the end of this stage, the ball boy was late in returning a ball, irritating the athletes on the bench of Abel’s team. When they went to warm up behind the door, they had a disagreement with the professional, which ‘led’ the rivals

With a scoring advantage for Tricolore in the first phase of the duel, the cast descended into the locker room to applause. The position did not change with the return of the match after half-time.

The San Paolo team returned to the field four minutes late, which must be noted in the summary. 15 minutes into the match, a confusion arose between the two teams with the fans.

During the disagreement that involved Nestor, Weverton, Calleri, Gómez and Reinaldo, the stands of Morumbi reacted and began to provoke the Palmeiras, once again to the cry of the World Cup.

The provocation also continued through the changes in Abel’s team. Dudu was booed as he left the field for Wesley’s entrance.

When Arboleda got injured, close to the 38th minute of the second half, the player was taken out on a stretcher with applause in the form of support.

With 38,201 in attendance, Morumbi was busier than on Monday (20), which had sold 31,055 tickets. The victory was much celebrated, with a light show and lots of applause.

Now, the Tricolore Paulista will meet Palmeiras again in July, at the Allianz Parque, and with a goal advantage, in search of the classification for the quarter-finals of the Copa do Brasil.