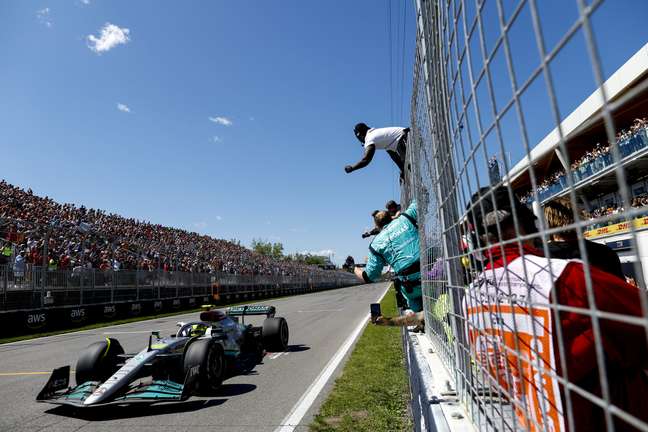 After the podium at the Canadian GP, ​​Lewis Hamilton said he no longer wants to conduct so many setup tests on the W13. According to the British, this is a time-consuming job and often gets in the way of the entire weekend.

The Canadian GP podium was highly celebrated by Lewis Hamilton. Not only did it manage to keep pace in the race, it also faced one of the strangest weekends for Mercedes in 2022. The case is that, once again, the team decided to conduct a series of configuration tests in the enigmatic W13 to understand what to improve and how. On Friday, the seven-time champion called the different setups “a disaster” and said he drove the worst car he ever had in Montreal. The scenario has changed until Sunday, but even so Hamilton understands that it is time to stop focusing on so many experiments.

Everything happens because of the difficulties that Mercedes encounters with the project itself. The porpoise still looks chronic, but there are other issues the silver team is trying to figure out in order to explore the car’s potential and gain performance. And it is on this that Hamilton has worked in the last stages, also thanks to his experience, Lewis has taken the lead in the tests carried out by Mercedes throughout the season. “Maybe in the second half of the season, George will be able to test,” the Briton replied in a statement to the Autosport magazine website.

And while the start was tough in Canada, the W13 that hit the track on Sunday looked competitive and fast. “I think going forward we will be a little more cautious about doing so many experiments because it really messes up the weekend, especially if you only have the first two free practice on a dry track and the third not, for example.” said the driver of car no. 44.

“I think we have a lot of lessons to learn from this weekend, in addition to the improvements we can make from now on,” added Gilles Villeneuve after the race.

“We had a really good race pace and it was nice to see that. It wasn’t always like this with this car, but it was great to have that performance.”

The next round of F1 will be home to the Englishman, another stage dominated by Lewis in recent years. Also for Silverstone, Mercedes intends to take a significant package of updates, repeating what it did at the Spanish GP. And although he has no hope of fighting for the win, Hamilton thinks the German team will be able to maintain the good momentum.

“I am looking forward to Silverstone because it is an important race for us and for me,” he said. “I just want to be in a fight with these guys. At the end of the race in Canada, with the safety car and all, I thought it was ok, that it was possible to find a way, but they were really fast. But we’ll get there,” he said. concluded.

The world champion of jiu-jitsu Leandro Pereira...
Previous articleTypes of intelligence: take the test and find yours
Next articleHaas sees MGU-K break four times in 2022 and Ferrari suspects the car’s height