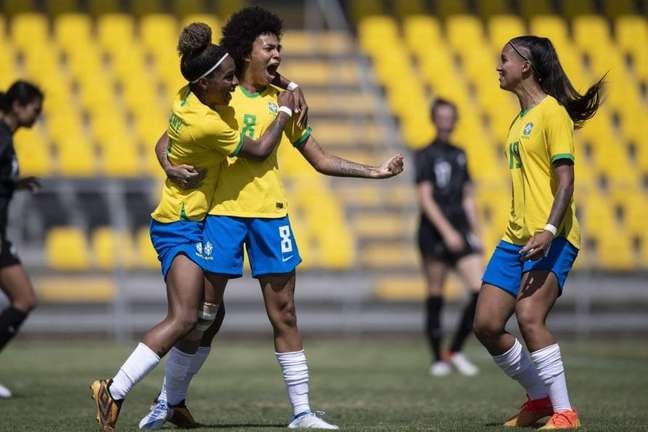 The Brazilian women’s team has closed with a golden key the preparation for the U-20 World Cup, which will be played in Costa Rica. This Friday, at the Edgardo Baltodano Briceño stadium, in Libera, already in Costa Rica, Brazil faced New Zealand in the last preparatory friendly and won 4-0 – with goals from Yaya, Dudinha, Luany and Tarciane.

After the last preparatory match, the team led by coach Jonas Urias is aiming for their debut against Spain, next Wednesday, 10th, at the National Stadium in San José, in the capital of Costa Rica. The other rivals in the group stage will be Australia (13th) and Costa Rica (16th).

On the field, the Selection kicked off the first stage with Barbieri; Ravenna, Patricia, Sassá and Bruninha; Yaya, Kaylane, Gi Fernandes and Dudinha; Luany and Mileninha. Brazil dominated the action of the match and opened the scoring with a lightning goal from Yaya. At 30 ‘the midfielder came free in the area to score the first. It didn’t take long for Dudinha to expand after 15 minutes. On the counterattack Bruninha finds the attacker free in the area and has only the task of kicking the corner of the goalkeeper.

Dudinha continued to create chances and nearly extended her to Brazil on two occasions in two crosses into the box. But it is from Luany’s feet that the Brazilian team reached their third goal. On the right Ravena crosses into the small area and Luany hits the corner, with no escape for the opposing goalkeeper.

At the start of the finals, Jonas Urias promoted seven changes in the team that started playing. Brazil starts again with: Barbieri; Bruninha, Lauren, Tarciane and Ana Clara; Cris, Yaya and Rafa Levis; Aline, Prissioni and Luany. The coach also gave the opportunity to goalkeeper Amanda, who entered in the 20 ‘.

Brazil kept the intensity and brought the game. At six minutes Prissioni arrives alone in the opponent’s goal, but the goalkeeper makes a great save. A minute later it is Cris’s turn to take a risk from inside the area and the ball goes to the baseline. Still maintaining the pressure, on the counterattack Yaya arrives free in the area and the archer ends up committing a penalty. In office, Tarciane expanded to Brazil.

With the partial victory 4-0, it was up to Brazil to manage the advantage and conclude the last test before the World Cup with another victory. In 12 matches against national teams, Jonas Urias has scored 12 wins and no goals conceded.

The world champion of jiu-jitsu Leandro Pereira...
Previous articleTwo people die after lightning near the White House
Next articleSantos announces Luan, ex Corinthian; the signature generates memes and divides the opinions of fans