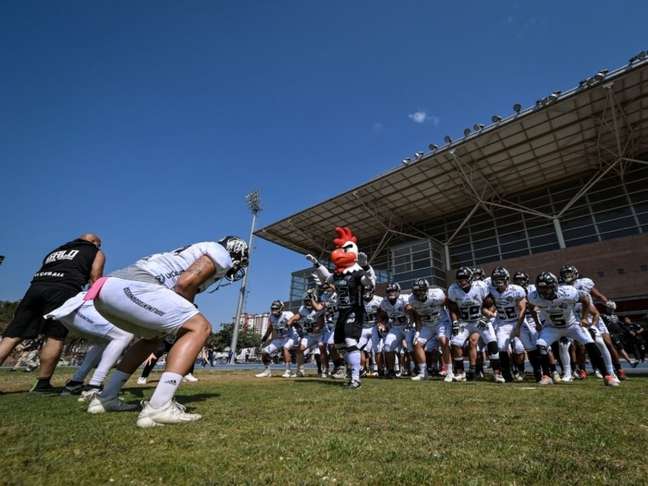 Complete program for the weekend of clashes in two national races

Check the details of the turn games.

On Saturday (6/8), the BFA League will play four games. At 10 Galo FA receives Vasco Almirantes, at the CTE / UFMG. Both teams are unbeaten and have two wins in the competition. Tickets cost R $ 10.00 and parking at the venue will cost R $ 20.00, both can be purchased on the day of departure, at the box office or through Sympla. Fans who are unable to attend the match will be able to follow the match via Portal O Tempo Sports.

Three more games in the afternoon. At 14:00 Santana Redbulls and Cavalaria FA measure their forces at the Joia da Princesa stadium, in Feira de Santana-BA. The hosts seek rehabilitation in the tournament after the debut defeat, while Cavalaria FA comes from two defeats.

For the Midwest Conference, at 15:00, Tubarões do Cerrado – defeated on his debut by Galo FA – will face Sorriso Hornets (which debuted with a victory over Cuiabá Arsenal) in Brasilia. Shortly after, at 16:30, Ufersa Petroleiros faces Fortaleza Tritões, in Mossoró-RN. The home team seeks their second win in three games, while the Ceará team seeks their second consecutive BFA League victory.

Fortaleza Tritões seeks his second victory in the national championship of the Brazilian Football League (BFA). The tricolor team will face next Saturday (6/7), in a match valid for the Northeast Conference. The game takes place in Mossoró-RN and will start at 16:30.

According to the coach of Fortaleza Tritões, Glauco Paes, the victory is essential to maintain the leadership of group B and get closer to the playoff standings.

It will be our first away game and we will have to face, in addition to the adversity of the away match, an excellent team, well assembled and also born from a victory. Being in the same group, it is a direct confrontation that can further define who qualifies for the playoffs. We know it will be a difficult match against Petroleiros, but our off-field work has doubled to be able to return victorious to Fortaleza, “said the Italian coach.

Sunday (7/8), five more games for the BFA League. In the Northern Conference, two games will be played at 9:15 am. Remo Lions welcomes Manaus FA. Manaus FA seeks second win in the competition, while Remo Lions has two defeats. The Amazon team should debut linebacker Ed Santos (who returns to the team after a spell in Turkey) and Mexican running back Macedo Otero.

In the afternoon, all matches are valid for the Southern Conference. At 2.30 pm, JEC Gladiators receives Istepó FA at 2.30 pm, at the Grêmio Whirlpool in Joinville-SC. At the same time, Bulldogs FA and Canoas Bulls face off at Parque do Chimarrão, in Venâncio Aires-RS. Finally, at 3 pm, Itajaí Almirantes and Moon Howlers close the round of the BFA League at Clube Nautico Almirante Barroso, in Itajaí-SC.

Brazilian of the CBFA

The Brazilian CBFA championship will have eight games this weekend. On Saturday (6/8), in a match valid for the access division, São Paulo Storm receives Campo Grande Cowboys, at the CT Touchdown, in Sao Paulo, at 2 pm. Shortly after, at 6 pm, the Rondonopolis Hawks face Moura Lacerda Dragons, at the Estádio Eng. Luthero Lopes, in Rondonopolis-MT. The duel is valid for the Elite of the competition.

On Sunday (7/8) all matches are for the access division. In Rio de Janeiro, Blaze FA and Mesquita Titans will play, starting at 9:00, at the CE Univ. White Castle. At 10 the Golden Lions face the Pouso Alegre Gladiadores, at the Frigoarnaldo Arena, in Contagem. At the same time, Goiânia Saints captures Nova Serrana Forgeds, in the capital of Goiás.

In the afternoon, three games and all at 2.00 pm The Criciúma Iron Tigers receive the Guardian Saints, at the SATC, in Criciúma. The Curitiba Lions take on the Palmeiras locomotives, at the Croco stadium, in Curitiba. Finally, the Londrina Bristebacks take on the Sorocaba Vipers.

The world champion of jiu-jitsu Leandro Pereira...
Previous articleSerena Williams prepares a new fund for startups and wants to invest in Brazil
Next articleInterest on aid salaries should be limited to Selic, Idec says