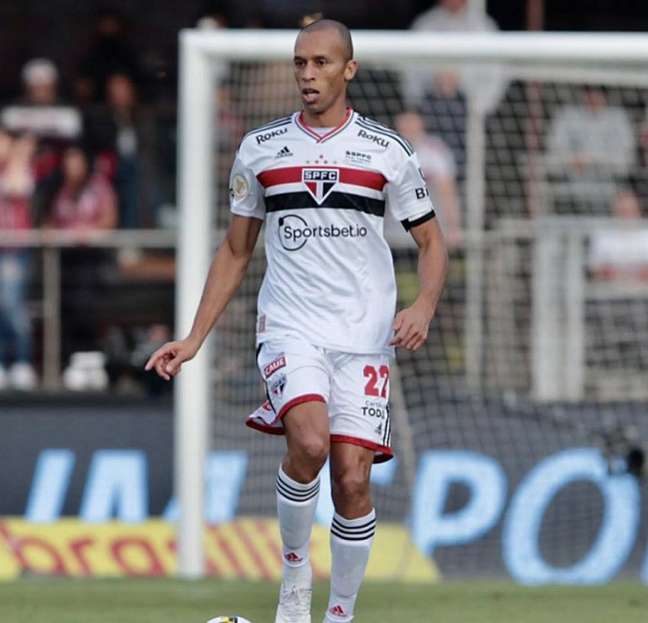 in the last game of Sao Paulo, against Ceará, for the Copa Sudamericana, Miranda was criticized by the public after a defensive mistake that almost led to an opponent’s goal. Fortunately, at the moment, Filippo Alves he managed to carry out the defense with mastery and saved the Tricolor.

> How is San Paolo doing at the opening of the transfer window? The back and forth of the market in Tricolore

However, even with the latest failure, the veteran has shown good stats since taking over from Arboleda in the starting lineup.

The Ecuadorian is out until the end of the season. Despite some evolution in treatment, Arboleda is not expected to recover from surgery on his left ankle until the end of the year.after a fracture and a rupture of the ligaments – which he suffered against Palmeiras, in the second round of Copa do Brasil, in June.

With the departure of the athlete, hitherto absolute holder on the defensive line of Rogério Ceni, Miranda took his place. And according to what he has shown, he has recovered a pace of play that he did not show at the beginning of the season.

Of the first ten matches of the San Paolo this year, also in the Campeonato Paulista, the veteran had only played four. After a mistake against Red Bull Bragantino, his chances of him in the team were further diminished.

In a February match against Bragança, Miranda’s failure resulted in one of the goals in the Tricolore’s 4-3 defeat.

Although he gradually gained more minutes on the pitch, during the mixed zone after the match with América-MG, in June, for the Brazilian, the veteran talked about this precise moment and also showed some dissatisfaction with the matches on the bench.

– I just had an unhappy match and paid a very high price. I try to work in silence, day after day to earn my position. Luckily on the field I can prove my qualities – Miranda said at the time.

However, without Arboleda, the 22 jersey has once again established itself at the Tricolor, a club where he is already seen as one of the most exceptional athletes. According to the data released by the profile ‘SPFC Statistics‘, since the defender regained his title, he has made 100 defensive moves in nine games.

That is, an average of 11 actions per game, an exceptional number. For the Copa do Brasil, against Ceará alone, there were 13.

Also, it takes 374 minutes to dribble. Other statistics also point to a good time for the veteran.

According to the investigations carried out byFootStats‘, Miranda has the second-highest batting average of the team in the Brazilian league: seven per game. This number is below only one player, precisely Arboleda.

With few options for position, Miranda has become a key player. Without the Ecuadorian, Rogério Ceni has only Diego Costa and Léo as the most experienced for the tricolor defense. There are also Luizão and Beraldo, but both have recently switched to the professional team.

Thus, Miranda returned as a salvation. One of the oldest players in the current squad, in addition to his experience on the field and his relationship with San Paolo, has a leadership spirit of great help for younger athletes. Of all available for defense, he is the only one who has not arrived from Cotia.

However, even with these factors, conversations about a future restructuring are avoided and “swept under the carpet”. At 37, every time Miranda was asked about retirement or contract renewal, nothing was answered in a more concrete way.

The defender has been an important figure for the club for many years. Three-time Brazilian champion in 2006, 2007 and 2008, he played alongside Rogério Ceni and other big names that have marked the history of the Morumbi club. Ten years later, in 2021, he is back.

Your contract will last until the end of this year. But the defender deflected all subjects who said something. In his words, “St. Paul has other priorities at the moment”.

– Nothing came to me, I didn’t speak to Saint Paul. For me, São Paulo has other priorities. Julio knows, the board trusts my work a lot. I think there are many other priorities ahead of me, I am not in a hurry for this, the board is in no rush for this, so let it go and keep it up – he said after the victory against América-MG, in the quarter-finals of the Cup. of Brazil. .

With his performance, the athlete should continue to be one of Ceni’s main options in this decisive month that Tricolor will face.

When Chinese businesswoman Yang Jing planned her...
Previous articleInterest on aid salaries should be limited to Selic, Idec says
Next articleResponsibility and humanization: the specialist reveals the success of Abel Ferreira at the Palmeiras