With Bustos, the San Paolo reaches 88 foreign players in history 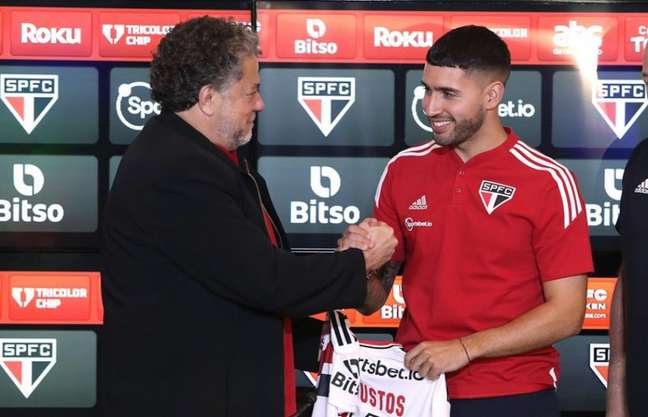 The striker is the 31st Argentine to play for the club: the neighboring country is the record holder among the gringos

Officially presented as a new reinforcement of the St. Paul for the season, striker Nahuel Bustos he became the 88th foreign player to wear the tricolor jersey.

According to the data of Michael Serra, historian of Sao Paulo, Argentines, like Bustos, are the absolute majority of foreigners who defend the Tricolore. There were 31 in history, including Calleri and Galoppo, other gringoes from the neighboring country who are part of the current squad.

A country admired by São Paulo for the large number of historical idols generated, such as Forlan, Pedro Rocha, Dario Pereyra and Lugano, Uruguay is in second place in the ranking, with 18 athletes.

Two other South American countries share third place: Chile and Paraguay, both with seven athletes in their tricolor history.

Other gringos in the current squad include midfielder Colorado, the sixth Colombian in the history of the tricolor, and Arboleda, the fourth Ecuadorian.

If the arrival of defender Nahuel Ferraresi is confirmed, who San Paolo also agrees to borrow from Group City, this will be the second Venezuelan to play for the Morumbi club.

Discover some of the other nationalities of foreign athletes who have passed through the Tricolore: