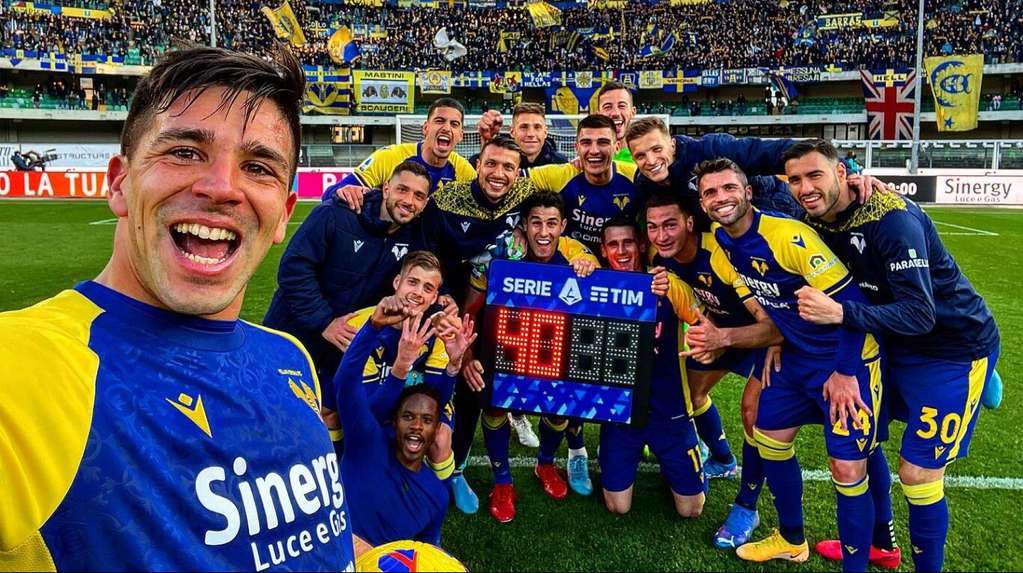 The Argentine striker sits third in the Serie A goalscoring charts with 16 goals and is trailed only by Ciro Immobile and Dusan Vlahovic.

Giovanni Simeon He is in a moment of total maturity and his great present confirms it. The Argentinian striker scored 16 goals in Italian Serie A with Hellas Verona, he is one of the tournament’s top scorers and the Napoli have already set their sights on him for next season.

According to the newspaper Corriere dello SportNapoli want to strengthen their attack for the next season and that’s why they plan to land the Argentine and spend several million dollars.

The Italian team wants to cover the departure of Belgian Dries Mertens with the arrival of the son of “Cholo” Simeone, since he knows the Italian tournament and has been in Italy for six years after leaving River in 2016. Before arriving at Hellas Verona, Cholito played for Genoa, Fiorentina and Cagliari .

Simeone, 26, surpassed his goalscoring record since playing in Italy with 16 goals, compared to the 14 he scored at Fiorentina in the 2017/18 season, his highest tally so far this year.

The son of Diego Simeone, current coach of Atlético de Madrid, could still improve his figures in this final stretch, although with Few chances to fight to be the ‘Capocannoniere’ (scorer in Serie A) since Ciro Immobile, from Lazio, has 26 goals.

Simeone’s stats in Italy boil down to 66 goals and 19 assists in a total of 211 games played.

Giovanni Simeon You know this is your year. Live the most outstanding season of Calcio and, with 16 goals , He is third in the table, behind Ciro Inmobile (Lazio) and the Serbian Dusan Vlahovic, recently arrived at Juventus.

His great gift is no accident. He has evolved a lot in his game and in his personal life and a lot of it is attributed to meditation . In a newspaper interview OleCholito told how he managed to reach this good level and his illusion of reaching the 2022 World Cup in Qatar.

“Meditation has helped me a lot to connect with my feelings . I am more sensitive and I understand better what is happening to me. And I detect faster when I deviate from the trajectory and when I am not, ”says the striker.

In addition, he indicated that he works with a yoga teacher every day, something that helps him in games: “It helps me especially in the field, because our heart rate is high, the oxygen does not enter the brain and you cannot think . You can miss a goal and leave the game. But if you go, come back. come back And meditation has helped me a lot to find this path.

In this sense, he added: “Seeing everything that is happening to me now, I do not consider it my ceiling. With all the experience I have, I can give a lot more. I see things that I did not see before. Meditation helped me a lot, seeing it from the outside, going to the stadiums to watch football and understanding the gestures and the heads of the players”.

Although he was always on the shortlist, Simeone knows he still has to earn a place in the Argentina national team . He is excited to be part of the Qatar 2022 World Cup and is committed to continuing to improve to be called up.

“I feel integrated into the group because I have always had the opportunity to be called up. I was in the first three quotes in 2018, which were the most important for me, because the manager was starting to see the players. I was with them a year ago, now I was very close (Editor’s note: he was shortlisted against Chile and Colombia) and I always felt like I was part of the group. I love it and it gives me the strength to keep insisting that I want to be “, he finished.

Previous articleEuropean Commission chief: Gas cut, Russia is hurting itself
Next articleThe Russian Ministry of Finance has estimated the budget deficit for 2022 at 1.6 trillion rubles