What is waiting for the Ukrainian “Azov” fighters – an exchange or a Russian court? 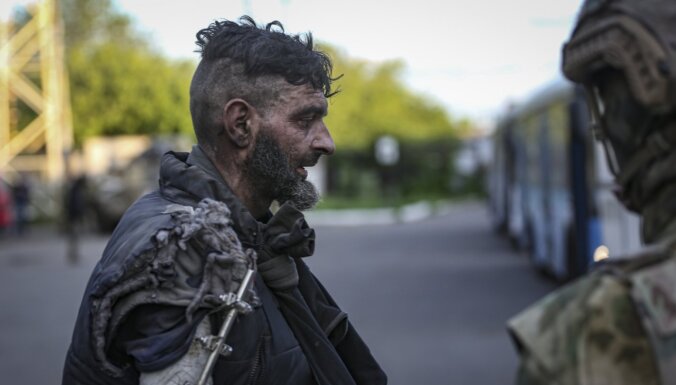 The fate of Ukrainian soldiers who surrendered to defend Mariupol remains uncertain. In pro-Kremlin public opinion, there is a demand for severe punishment of the fighters of the Azov regiment, whom Russian propaganda calls “Nazi criminals”. But Ukraine also has a considerable number of Russian prisoners, many of whom are suspected of particularly serious war crimes, so the answer can be reversed. How will Moscow and Kyiv solve the POW problem?

According to the Russian side, since May 16 (when it was agreed to take the wounded soldiers out of the factory), 1,730 soldiers have surrendered, 80 of them seriously wounded. It is unknown how many more people can stay in the underground catacombs.

As Russian media reported, the seriously injured were taken to a hospital in Novoazovsk, east of Mariupol on the border with Russia.

Most of the prisoners of war were sent to a penal colony in the village of Elenovka near Donetsk – according to the adviser to the mayor of Mariupol Pyotr Andryushchenko, there are already three to four thousand inhabitants of Mariupol who have not passed the so-called filtration.

At least 89 other people among the defenders of Azovstal were taken to Russia and imprisoned in SIZO-2 in Taganrog.

Mariupol was surrounded by Russian troops in early March, shortly after the start of the war. The city was defended by soldiers of the Azov National Guard Regiment, marines, border guards, territorial defense forces and police. The defense of Mariupol trained large units of the Russian army and bought the Ukrainian army time to prepare new lines of defense and reserve.

At the end of April, Russian troops succeeded in occupying most of the city, and Ukrainian servicemen (and civilians with them) were blocked at the Azovstal factory. Tanks, heavy artillery and aircraft were hurled at them, but resistance continued.

Defenders of the factory reported that about 600 wounded were in the dungeons on the territory of the company in unsanitary conditions, without medicine, water and food.

On the night of May 17, the General Staff of the Armed Forces of Ukraine announced a “rescue operation” for the servicemen of Azovstal. The department’s statement said 53 seriously injured people were taken to Novoazovsk hospital and another 211 servicemen were taken to Yelenovka.

“The Mariupol garrison has completed its combat mission. The Military High Command has ordered the commanders of the units stationed in Azovstal to save the lives of the personnel,” the General Staff said, adding that the servicemen would be sent back to Ukraine “through an exchange procedure”. .”

Volodymyr Zelenskyy said in his video message that “Ukraine needs living Ukrainian heroes” and that the work to return them “requires delicacy and time”.

Who is against the exchange

The exchange of prisoners of war and civilian detainees is common worldwide practice. As a rule, during a military conflict, the exchange takes place on an individual basis, but if a high-ranking soldier is captured, the enemy may demand even more for him.

After the end of hostilities and the conclusion of a peace agreement, the exchange generally takes place on an “all for all” basis. This rule can only work if one of the parties surrenders unconditionally.

Russian war supporters do not like the idea of ​​an exchange. One of the active participants in the 2014 conflict in the Donbass, the ex-head of the self-proclaimed DPR, Igor Girkin (Strelkov), wrote on his Telegram channel: “Judging by the reports, there is no no surrender, but another shameful agreement. Let’s wait for the results. If in the next few days “the heroes of Azov” will be showered with flowers in kyiv – it will be possible to declare another triumph of sabotage and idiocy in a bottle.”

The telegraph channel “PriZrak Novorossia” is even more radical – it calls the Azov regiment that defended Mariupol “an ideological-Russophobic unit”, the main goal of which is “the destruction and genocide of the Russian / Soviet people”.

Its authors openly urge not to leave any of the prisoners alive, and before that it is “demonstrative” to subject them to torture.

Some Russian politicians are also against the exchange. On May 17, Anatoly Wasserman, a State Duma deputy from the Just Russia for Truth faction, proposed to pass a resolution or law prohibiting the exchange of “Nazi criminals.”

Wasserman did not explain by what criteria Ukrainian servicemen should be classified as Nazi criminals, but Duma Speaker Vyacheslav Volodin immediately supported the idea and involved the defense and security committees in its development.

It was planned to start considering the draft resolution already on Wednesday, May 18, but something stalled – the Duma did not discuss Wasserman’s initiative.

According to Kommersant, Moscow really has no intention of exchanging Ukrainian military personnel, and the Russian authorities do not want to push themselves too hard in possible exchange negotiations.

On the morning of May 18, Andrei Klishas, ​​head of the Federation Council Committee on Constitutional Legislation and State Building, wrote on his Telegram channel that “all neo-Nazis in Azov should stand trial for crimes committed in the people’s regions of Donetsk and Luhansk”. Republics.”

According to the publication, this approach is also endorsed by the lower house of parliament.

Earlier, DPR chief Denis Pushilin said the fate of the Ukrainian military will be decided by the court.

“The process is very sensitive”

Ukrainian Deputy Defense Minister Anna Malyar believes that the statements of Russian politicians about the impossibility of exchanging captured “Azov” are intended only for internal propaganda.

“During this rescue operation and during the negotiations from there, we hear different statements from different people from different forces. Therefore, we must perceive them as political statements aimed at propaganda effect and propaganda objective. for Russian domestic consumption”, Maliar mentioned.

“Negotiations are ongoing because the rescue operation itself involves several complex steps. This process is very sensitive. Any information we announce publicly can harm both the process itself and our defenders,” a- she declared.

Ukraine also has many Russian prisoners of war whom the Ukrainian authorities can prosecute for war crimes such as massacres of civilians, violence against the population and looting.

Such a trial is already underway in Kyiv – Russian soldier Vadim Shishimarin is accused of killing an unarmed civilian. During the hearing, the Russian pleaded guilty, he faces life imprisonment.