“I shot to get behind me”: the Russian army was sentenced to life in kyiv 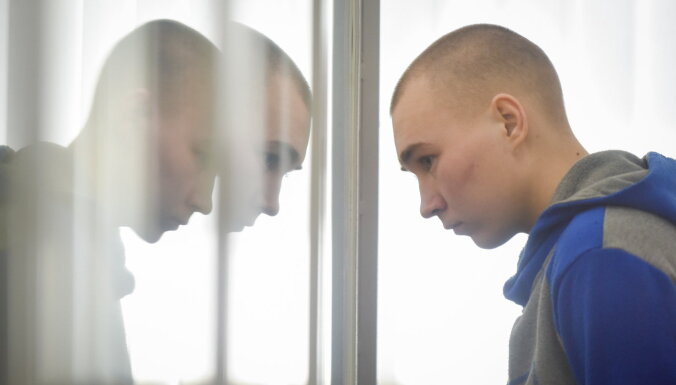 In Kyiv, the second hearing in the trial of Russian Sergeant Vadim Shishimarin, 21, took place. He is accused of having killed a 62-year-old civilian in the region of Sumy and is tried under the article “Violation of the laws and customs of war”. He is the first Russian soldier to be tried for war crimes since the invasion of Ukraine. The prosecutor’s office requested a life sentence for Shishimarin.

“I started screaming. Lots of screaming”

The court questioned the widow of the late Alexander Shelipov, Shishimarin himself and two prosecution witnesses – the neighbor of the Shelipovs in the village of Chupakhovka, as well as another captured Russian serviceman Ivan Maltisov. He was next to Shishimarin at the time of the murder.

Shelipov, 62, worked in the village as a tractor driver. “I was behind him like behind a stone wall,” his widow, Katerina Shelipova, told the court.

According to Shelipova, on the night of February 28, tanks drove through the village. She and her husband were sitting in the cellar, and on the morning of February 28, Shelipov decided, out of curiosity, to ride a bicycle to watch the funnel of the explosions.

Soon she heard a gunshot. The woman opened the gate to her house and saw a car, in the rear window of which was Shishimarin with a machine gun.

Shelipova closed the door, hid, and waited for the car to leave. Then she came out and saw her husband, he was already dead. “I started screaming. Lots of screaming,” the older woman said.

The widow said she wanted the Russian military sentenced to life imprisonment. At the same time, she added that she would not object to her exchange for the Ukrainian army in Azovstal.

“Why did you come, from whom to protect, did you protect me from my husband, whom you killed?” – at one time Shelipova asked the Russian army.

“I confess that you will not be able to forgive me, but I ask for forgiveness,” he said.

“I didn’t want to kill him”

Shishimarin himself fully admitted his guilt during the first court hearing on Thursday. He said he was ordered to shoot a civilian by an ensign and another person (he and Shishimarin, and prosecution witness Maltisov are referred to as “unknown”), who was with them in the car.

As Shishimarin and Maltisov said, they, together with three servicemen – an ensign, a senior lieutenant and an “unknown” – tried to join the Russian forces in a car taken from a civilian.

Initially, Shelipov, who was walking along the road, was noticed by a sign and an “unknown person”. The ensign saw Shelipov talking on the phone and ordered Shishimarin to shoot. The Shishimarin hesitated and did not fire, after which the “unknown” turned to the Shishimarin and started shouting at the sergeant to shoot, otherwise they would be in danger.

“I didn’t want to kill him. I shot to get behind me,” Shishimarin told the court.

According to him, he fired a short burst, but did not see Shelipov’s body. After that, the witness said, “the stranger” started telling Shishimarin not to worry, because you have to save yourself first.

During interrogations in court, the prosecution and the attorney questioned Shishimarin and Maltisov in detail as to why Shishimarin considered himself obligated to obey the order.

The highest rank of their five – senior lieutenant – could not influence the situation, as he was driving in the trunk of a car.

“The writing officer coordinated the order to fire with the senior lieutenant?” asked the prosecutor.

“No, it was in the trunk,” Maltisov replied.

Already after the murder of Shelipov, the car with the army came under fire. “Unknown” was injured (it was mentioned in court that he died later), Shishimarin, Maltisov and two elderly people decided to surrender the next day.

It is impossible to question the latter two in court – the prosecutor’s office reported that the ensign and the senior lieutenant were exchanged on April 13 for Ukrainian prisoners.

Proving Shishimarin’s guilt of violating the laws of war, during interrogation the court asked Maltisov how exactly it was necessary to act in a situation if the military suspected a civilian would report them to the Ukrainian army.

“Better to pick up the phone than to shoot,” replied the captured Russian soldier.

The prosecutor’s office requested a life sentence for Shishimarin, citing the advice of the victim, the murdered man’s widow, despite Shishimarin’s repentance and help in solving the crime.

“This is just one of the stories of which there are many after February 24. The wife was left without a husband, and the children and grandchildren were left without a father and grandfather. This case should become The sincerity of Shishimarin repents is a court decision His guilt has been proven even without him I ask the court to find Shishimarin Vadim Yevgenievich guilty of committing a crime under part 2 of article 438 and sentence him to life imprisonment,” prosecutor Andrei Sinyuk said in court (as quoted by LIGABusinessInform).

Shishimarin is charged with the article “Violation of the laws and customs of war” (part 2 of article 438 of the Criminal Code of Ukraine), which provides for a sentence of up to life imprisonment.

The next meeting will take place on Friday 20 May. It should start with a defense speech.

Shishimarin, a native of the city of Ust-Ilimsk, Irkutsk region, served as a squad leader in the 4th Kantemirovskaya Panzer Division in the Moscow region.

Previous articleWe are waiting for a creative experience: digital fashion on the catwalk at Riga Fashion Week
Next articleIn Poland, a dispatcher from Russia was arrested in absentia in the case of the Tu-154 crash near Smolensk