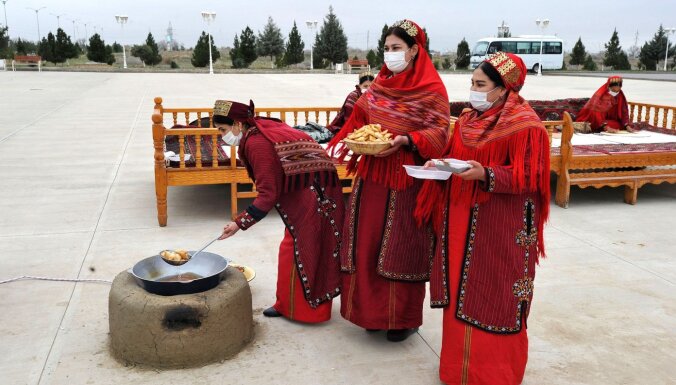 For quite some time now, women in Turkmenistan have been banned from having eyelash extensions, Botox injections, eyebrow tattoos, hair dyeing and sitting on the seat before a car. Bans in one of the world’s most closed countries often operate behind the scenes, meaning it can be impossible to challenge them.

The initiatives come from the 40-year-old head of state, Serdar Berdimuhamedov, who took over from his father, Gurbanguly, on March 12. Telling women how to behave is a tradition of Turkmen authorities, which began as early as Turkmenistan’s first president, Turkmenbashi.

“The Turkmens hoped that their newly appointed president, Serdar Berdimuhamedov, would take a more progressive path than his father, but they were seriously mistaken,” he added. The International Planned Parenthood Federation (IPPF) says in a statement .

According to the International Planned Parenthood Federation, abortions have indeed been banned in Turkmenistan, and henceforth, the authorized duration for termination of pregnancy has been limited from 12 to 5 weeks. At this early date, women are most often not even aware of their pregnancy.

“Overnight, the government enacted the law, which was originally passed in 2015, without any public consultation, that is, in fact, it was passed and published in secret,” the official said. ‘IPPF.

Women say that since the beginning of May, taxi drivers refuse to put them in the front seat, referring to a certain decree (adat in Turkmen) that was read to them in the taxi companies.

No one has seen the government documents and ordinances containing such prohibitions. This is a common practice in Turkmenistan, where the so-called “verbal law” is used, when it is enough for the president to verbally issue an order or sign an order that will not be published anywhere.

“Since 2017, Turkmenistan has refused to issue women’s driving licenses without explaining it in writing or verbally, so the introduction of the current restrictions does not come as a surprise to many people,” says Ruslan Myatiev, editor-in-chief of the Turkmen.news website. , adding that most it is probably an intra-ministerial order.

Myatiev is from Turkmenistan and knows first-hand the prohibitions of local authorities: in the 2000s, he could not enter public service centers if he wore shorts.

However, according to him, the situation has reached the point of absurdity, as his acquaintances and readers have told him: “I asked five of my sources to take a ride in the car in the front seat, and each times this led to the fact that they were stopped by traffic police and asked to move to the back seat”.

The journalist is convinced that women will continue to do everything, but in secret: “all these practices will simply go underground, but will not disappear anywhere”.

Other women say that in public office they were bequeathed to look good, to remove their manicures and tattoo their eyebrows.

Radio Azatlyk (the Turkmen branch of Radio Liberty is recognized as a foreign agent in Russia) reports that various airlines have fired about 20 flight attendants because of Botox on their lips and tattoos on their eyebrows.

Some of the employees were simply fined, other women lost their jobs for supposedly inserted breast implants or enlarged labia.

Owners of beauty salons in the capital have also been warned they will be fined for providing banned services and could even be arrested for 15 days.

Eyewitnesses speak of police raids in public places, where women are detained with false fingernails or false eyelashes.

“The new bans haven’t affected me in any way, it’s like I’m living in a different world,” Umida (name changed at his request) told the BBC.

The girl works for an international company in Ashgabat, the capital of Turkmenistan, regularly doing manicures and eyelash extensions. She commutes to work mainly by taxi and usually takes a seat in the back if she wishes. The traditional dress is worn only on family holidays.

According to the authorities, not only cosmetic procedures are contrary to traditional values, but also the manifestation of feelings in public.

Radio Azatlyk (the Turkmen branch of Radio Liberty – recognized in Russia as a foreign agent) reports the arrest of several couples in the town of Mary who were holding hands in public places.

The inmates, they say, were released after writing a statement that they would no longer show their feelings in public.

Turkmen political scientist Serdar Aytakov, who writes under a pseudonym, says the restrictions were drawn up at length, coinciding just with the start of the new president’s regime.

“Many residents of Turkmenistan are in internal migration – they practically do not participate in the political and state life of the country, so they ignored seminars and lectures in all universities and some schools that long preceded these bans on” peculiarities of the norms of Turkmen national traditions, the sanctity of the family, raising children and etiquette”. These seminars have long been an indicator that the screws will soon be tightened in the field of “public health” and that the women will be the first to be distributed.”

The political scientist considers that the innovations are the result of the publication of the 57th book of the former President of Turkmenistan Gurbanguly Berdimuhamedov “The meaning of my life”, in which he writes about “the essentially national spiritual and moral values ​​transmitted by the Turkmen people from generation to generation for thousands of years.”

As a child, Serdar was raised with rigor, and he grew up adept at traditional values ​​built on the main idea that a woman is a mother and a housewife, nothing more, continues the political scientist and quotes one of the old. officials who knew the Berdimuhamedov family:

“Serdar was guarded very strictly, with iron fists – at home. And at school and university he was surrounded by an atmosphere built on ultranationalism and pseudo-traditionalism, implanted by Niyazov, where the role of a woman was reduced to the role of a mother and housewife, and the manifestation of emancipation was considered an anomaly. And in this rejection of the role of women and, in general, in the extent opinions, Serdar differs very unfavorably from his father – a frank and pronounced sybarite, whose youth fell on the “disco”, cosmopolitan and emancipated years of the 1970s-1980s. In the spiritual sense, Serdar is more likely the son of Saparmurat Niyazov than Gurbanguly Berdimuhamedov.”

At the same time, the political scientist notes that the tendency towards “mean repressions” in the legislative activities of Berdimuhamedov Jr. is part of the continuity of the practice of the Turkmen authorities, which amounts to holding the population in a vice under the fear of arrests and fines, as well as bans and psychological pressure.

A lesson in kindness

Serdar Berdymukhammedov, 40, is the only son of the former president of Turkmenistan to win an election with 72% of the vote in March this year. Analysts said he had long been prepared for the transit of power and his reputation was not tarnished. Few people expected Serdar (young and, it seems, more progressive than his father) to ban women specifically.

Turkmenistan is one of the most closed countries in the world and in the region. Some bans operate behind the scenes in the country and, coupled with internet restrictions, are often implemented without publicity from the global community.

Serdar Berdymukhammedov is not the first president to tell women what to wear and how to manage their bodies.

Saparmurat Niyazov was an innovator in this field. A woman’s place, according to Turkmenistan’s first president, is at home, and she should not be allowed to “declare business”. But at home a woman is already a goddess and is responsible for the well-being of the family, Niyazov, who has been in power for 21 years and received the title of Turkmenbashi, the father of all Turkmens, developed the idea.

He expressed his opinion on Turkmen identity in the book “Rukhnama” (“Book of the Spirit”), which was studied in schools across the country.

During Niyazov’s reign, women were encouraged to wear traditional clothes and long dresses, and married women to cover their heads. However, women are also not allowed to wear a Muslim headscarf, veil and other items of religious affiliation.

Indeed, Turkmen women, especially in the regions, most often wear traditional outfits (floor-length dress with “balat” pants), despite their high cost. The price of Turkmen national dresses with hand-made embroidery on the chest reaches $2,000.

Berdymukhammedov Sr. released his version of the Ruhnama at age 64, as did Niyazov.

Well, the new “leader” (this is how the name Serdar is translated from the Turkmen language) of Turkmenistan did not wait another 20 years and started with bans on the fate of women.

Previous articleEmergency at the Riga Marathon: A car entered the track and nearly knocked down runners
Next articleAustria to deprive Gazprom of access to gas storage facility in Haidach