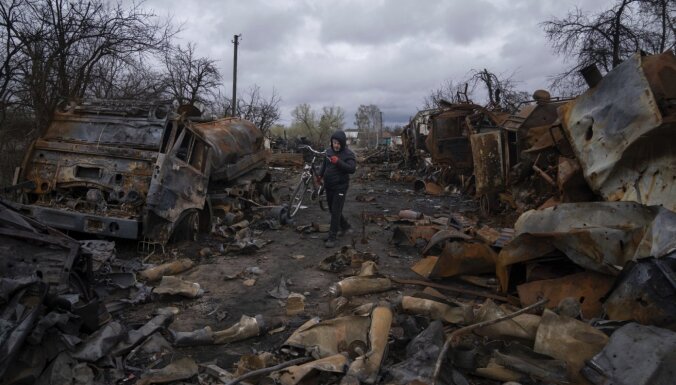 “Vladimir Putin justifies his war of aggression by the ‘denazification’ of Ukraine. An internal document of the German federal intelligence service BND shows that the troops in Moscow are supported by far-right groups”, writes the weekly German Der Spiegel. According to German intelligence, the Russian “right-wing extremist and neo-Nazi” groups fighting in Ukraine turned out to be a division of the Russian Imperial Movement and the Rusich group.

The Russian service of the BBC tells what we know about them.

In an article published on Sunday, Spiegel refers to a confidential BND report sent to federal departments the week before last.

According to the BND, at least two far-right groups are involved in the fighting in Ukraine.

The number of militants fighting in Ukraine is not indicated in the report. The two groups fought on the Russian side in Donbass in 2014 and 2015.

Collaboration with these groups takes the Kremlin’s declared cause of war – the so-called “denazification” of Ukraine – to the point of absurdity, Spiegel recounts in the intelligence document.

The report states that on the day of Russia’s invasion of Ukraine on February 24, the head of the Imperial Russian Legion, Denis Gariev, wrote on Telegram: “We absolutely support the elimination of the separatist entity called Ukraine”.

The BBC found this message on a Telegram channel that was renamed PARTIZAN on February 27. Under the post is the signature “Head of the Fire and Tactical Training Center “Partizan” Gariev Denis”.

The same message was published on February 24 by the telegram channel of the Russian Imperial Movement, notes Deutsche Welle.

BND draws attention to the fact that one of the telegram channels announced the recruitment of fighters with combat experience and graduates of the training center of the Partizan organization in St. Petersburg. At the same time, it is not clear whether the recruitment was carried out at the request or on the basis of consultations with the Russian leadership, note the authors of the report.

The recruitment of volunteers wishing to participate in the war with Ukraine was announced on March 8 by the same telegram channel Partizan, the BBC was convinced of this.

The report states that Gariev’s deputy died in Ukraine and that Gariev himself was injured. At least two other of their comrades in arms were seriously injured.

On the Partizan Center page, the BBC found a post about Gariev’s injury dated April 19: “Our Commander Denis Gariev, was injured, in the leg, bones intact, evacuated to Russia, feeling well , aiming to resume his duties soon”.

In May, an article about the death of Gariev’s deputy, Denis Nekrasov, near Izyum, appeared on the RID telegram channel, Deutsche Welle attracts attention.

According to Spiegel, the Rusich group has been fighting in Ukraine since early April at the latest.

In 2014 and 2015, its fighters were “notorious for their extreme cruelty” and a reputation for “never taking prisoners”, the German edition of Der Tagesspiegel points out in an account of the material.

The Russian social network VKontakte has a page for the “Sabotage and Assault Reconnaissance Group Rusich (DSHRG)”: they call themselves a “volunteer unit”, which from June 2014 to July 2015 actively participated in the armed conflict in Ukraine on the side of the separatists.

It also clarifies that since the start of the Russian invasion of Ukraine in February 2022, the group has taken part in hostilities.

Why are the people involved in the BND report known?

Members of the “Russian Imperial Movement”, as the media reported, had already taken part in hostilities not only in eastern Ukraine, but also in the Middle East.

In 2020, the BBC also reported links between Russian and Swedish nationalists, including two “suicide bombers” convicted of terrorist attacks in Sweden, who were trained in the military camp of the same center in Saint Petersburg “Partizan”, organized by the “Russian Imperial Movement.”

The “Partizan” tactical and fire training center under the leadership of Denis Gariev officially operates in St. Petersburg. His avatar on the website and on the Vkontakte network coincides with the avatar of the Partizan telegram channel, which appears in the BND report.

In a 2015 video interview published on the Partizan Center page, Denis Gariev is presented as “the head of the militia training center”.

In the first years of the conflict in eastern Ukraine, he was, according to the electronic database Kartoteka.ru, the president and co-founder of the St. Petersburg regional public organization DND “Reserve Druzhina” (she was located at the same address as “Partizan”). And in 2018 it became Evrika LLC, which previously received government orders in the amount of more than 10 million rubles. structures of the FSB, FSO, Ministry of Internal Affairs, Chief Military Prosecutor’s Office and others.

The Partizan Center’s open course schedule, as the BBC writes, largely coincides with the description of the training that has been attributed to those convicted in the high-profile Network case (they were recognized as members of the community called the Network, which in Russia was put on the terrorist list and banned).

In Partizan, one of the convicts in the Network case, industrial climber Yuli Boyarshinov, also received public training. The defenders of the “Network” case did not verify the legality of the activities of this center.

In 2020, the US State Department included the “Imperial Russian Movement” in the list of international terrorist organizations, and Denis Gariev and two of his associates as RIM leaders – in a separate list of “specially designated” persons and blocked.

The Russian Foreign Ministry then called the US decision “unreasonable”. In 2021, Canada also designated RIM as a terrorist organization.

Previous articleMarcos Rojo, the provocateur: he smoked and drank beer in the middle of the field after the coronation of Boca
Next articleRestaurants implicated in VAT fraud and money laundering case