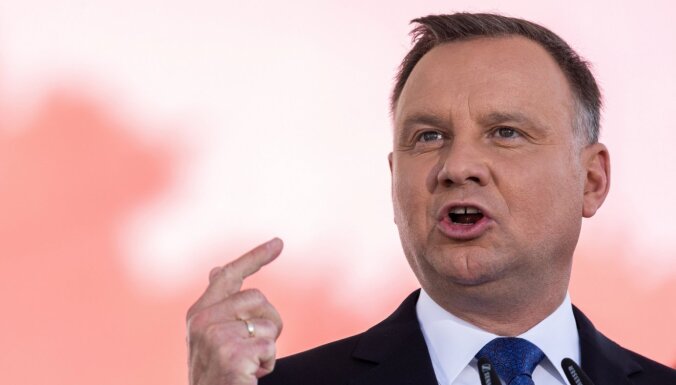 Polish President Andrzej Duda sent a strong message to the Verkhovna Rada of Ukraine, in which he expressed his strongest support for the country. He told parliament that today’s free world has the face of Ukraine.

People’s Deputy Roman Grischuk published in his “Twitter photo of the President of Poland’s speech to Ukrainian lawmakers, holding the blue and yellow Ukrainian flag.

“Dear Ukrainians, your relatives – wives, parents, children – who were forced to leave for Poland are not refugees in our country. They are our guests,” Grischuk quoted the Polish president as saying.

During his speech, Andrzej Duda thanked Ukraine for protecting Europe from “Russian imperialism”.

The Polish president said he was worried about calls from some Western politicians to negotiate with Putin and even give in to some of his demands. “No decision about your future will be made without you,” he assured the Ukrainians.

In his speech, which received a long standing ovation from MPs, Duda said Poland would do everything possible to help Ukraine join the European Union.

According to Ukrainian President Volodymyr Zelensky, the war between Russia and Ukraine has canceled all the contradictions that previously existed between kyiv and Warsaw.

Since the start of the Russian invasion, Poland has been one of Ukraine’s staunchest allies. According to the UN, nearly 3.5 million Ukrainian refugees arrived in Poland during the war. Warsaw also sent tanks and rocket launchers to the Ukrainian army.

Since the start of the war, Duda became the first foreign leader to address the Verkhovna Rada in Kyiv.

Previous articleThere is a severe shortage of infant formula in the United States
Next articleAfter the death of a biker, a criminal case was opened against the border guard