The Taliban are asking for international aid after the earthquake that killed more than 1,000 people in Afghanistan 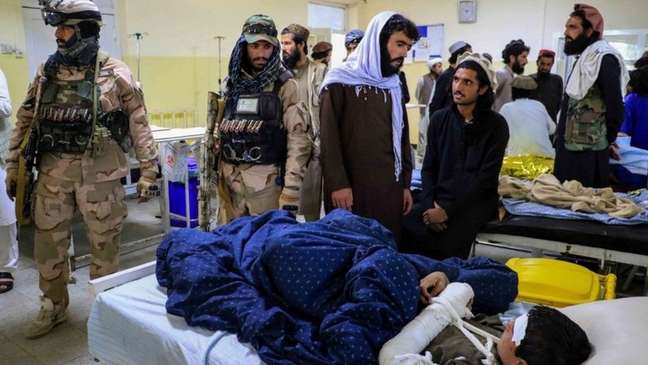 A 6.1 magnitude earthquake left at least 1,500 injured in the south-east of the country, which is suffering from a wave of hunger and poverty.

The Taliban group, which has controlled Afghanistan for almost a year, has asked for international help in the face of the devastating situation in the country, struck in the early hours of this Wednesday 22/6 by an earthquake measuring 6.1 on the Richter scale.

According to local authorities, more than 1,000 people died and at least 1,500 were injured.

Paktika province in southeastern Afghanistan was the hardest hit region. About half a million people inhabit the area. The epicenter of the quake was about 44 km from the city of Khost, but witnesses said they felt the tremors in the Afghan capital Kabul and even in Islamabad, the capital of neighboring Pakistan.

United Nations (UN) teams are struggling to provide food and shelter to the homeless. And efforts to rescue the victims in the rubble were hampered by torrential rains and hail.

The earthquake – the deadliest in the country in the past two decades – represented a significant challenge for the Taliban, the Islamist group that regained control of the country in August 2021 after nearly 20 years of US-led military occupation.

“Unfortunately, the government is subject to sanctions, so it is financially unable to help people as needed,” said Abdul Qahar Balkhi, a senior Taliban official.

According to Qahar Balkhi, “international agencies are helping, countries near or even far have offered their assistance, which we thank and welcome. Assistance needs to be increased to a great extent because this is a devastating earthquake that has not occurred in decades. . “

The number of people under the rubble is unknown. Health and humanitarian workers said the rescue operation was particularly difficult due to the weather conditions in the region. In more remote areas, helicopters were used to transport victims to hospitals.

Both the UN and Pakistani humanitarian agencies are working on humanitarian support, which includes sending medical teams and resources to the affected area.

A relief agency, Intersos, said it was ready to send an emergency medical team made up of two surgeons, an anesthetist and two nurses.

The death toll is expected to rise

Most of the confirmed victims so far lived in Paktika’s Gayan and Barmal districts, a local doctor told the BBC. An entire village in Gayan would be destroyed.

“There was an accident and my bed started shaking,” one survivor, who gave his name only as Shabir, told the BBC.

“The ceiling fell. I was trapped, but I could see the sky. My shoulder was dislocated, my head was injured, but I was able to get out. I am sure that between seven and nine people in my family, who were in the in my own room, I’m dead “‘Every street you go you feel mourning’

A doctor working in Paktika told the BBC on condition of anonymity that health professionals were among the victims.

“We didn’t have enough staff or hospital facilities before the earthquake, and now the earthquake has ruined what little we had. I don’t know how many of my colleagues are still alive,” he said.

Communication after the earthquake is difficult due to damage to cell phone towers and the death toll could rise further, another local reporter from the area told the BBC.

“Many people are unaware of their relatives’ condition because their phones are not working. My brother and his family died and I only found out after many hours. Many villages were destroyed,” the reporter said.

Afghanistan is an earthquake-prone country as it is located in a region of the planet with active tectonic plates. Its territory includes several fault lines, including the Chaman fault, the Hari Rud fault, the Badakhshan Central fault, and the Darvaz fault.

Over the past decade, more than 7,000 people have been killed by earthquakes in the country, according to the United Nations Department for the Coordination of Humanitarian Affairs. There are an average of 560 deaths per year due to earthquakes.

More recently, in January, consecutive earthquakes in the west of the country killed more than 20 people and destroyed hundreds of homes.

Even before the Taliban assumed central power, Afghanistan’s emergency services were overwhelmed with dealing with natural disasters, with few planes and helicopters available for first responders.

But the country has experienced a severe shortage of medical supplies in recent months, amid a widespread shortage of nearly all essential items. The withdrawal of US military forces has resulted in the departure of many workers from international agencies.

And the Taliban government, which adopts Islamic sharia law and recently banned education for women and adolescents, is seen as an international pariah, with whom few countries have close relations.

According to the UN, 93% of families in Afghanistan have food problems. Lucien Christen of the Red Cross said Afghanistan’s “dire economic situation” meant “them [as famílias afegãs] I can’t put food on the table. “

Former US President Donald Trump knew his...
Previous articleCoritiba is fasting for victories and is close to the Z-4
Next articleMaya Capital opens a $ 100 million fund against the startup crisis