Putin and Xi show harmony at the BRICS meeting 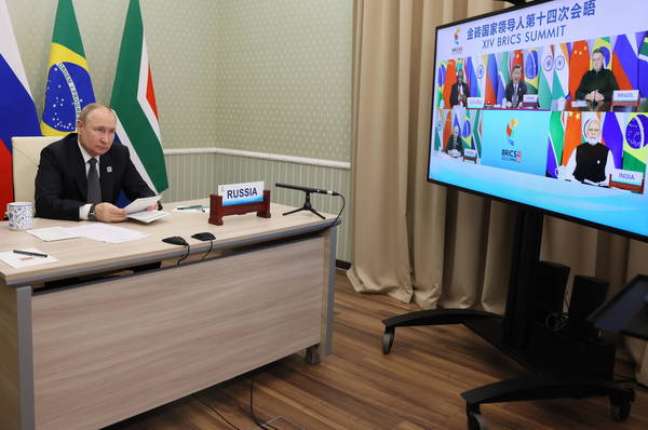 Bolsonaro ignored the war in Ukraine in his speech

The leaders of the BRICS met virtually on Thursday (23), in the first meeting of the group since the beginning of the Russian invasion of Ukraine.

In the war spotlight, Russian President Vladimir Putin took the opportunity to urge Brazil, India, China and South Africa to cooperate against the “selfish actions” of the West.

“Western states dump their macroeconomic errors on the rest of the world through financial mechanisms,” Putin said, referring to the sanctions imposed by the United States and Europe for the war in Ukraine.

The speech was echoed by Chinese President Xi Jinping, who criticized the “unilateral sanctions” and called for an end to the “cold war mentality”. “It is necessary to overcome the small hegemonic circles and reach the large family of a community with a shared future for humanity”, he reiterated.

According to Xi, the world needs “genuine multilateralism” and a system that “has the UN at its center” and “based on international law”.

Bolsonaro, for his part, ignored the war in Ukraine in his speech and called for the reform of multilateral organizations, including the World Bank, the International Monetary Fund (IMF) and the UN Security Council.

“The growing weight of emerging and developing economies must be given due and deserved representation. For Brazil, the BRICS is a model of profit-based cooperation for all parties involved and for the international community as a whole. , we must choose priorities with accountability and transparency, “he said.

Also according to Bolsonaro, “care must be taken so that the diplomatic exercise always follows the fulcrum of the greater objective of producing prosperity and peace”.