The same day the US Supreme Court eases access to weapons, the Senate approves the restricted bill 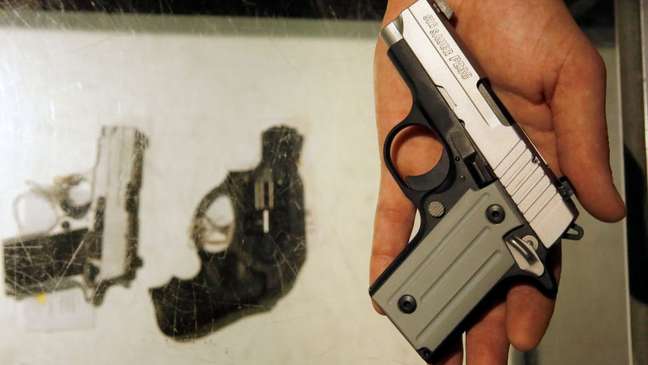 Amid mourning over the country’s massacres, the Supreme Court’s decision is expected to increase the number of people carrying weapons legally on the streets. Hours later, Democratic and Republican senators backed a law that limits purchasing options.

Thursday 23/6 was a day of twists and turns on one of the most controversial topics in the United States: weapons.

In its most important ruling on the matter in more than a decade, the US Supreme Court overturned a New York law that prohibited civilians from carrying weapons on the street.

A month after the Texas elementary school massacre, which killed 19 children and prompted Republicans and Democrats in Congress to work together for more restrictive legislation on access to guns in the country, the court decided to expand gun rights.

And, within hours of the court’s ruling being released, the United States Senate reacted and passed with 65 votes to 33 a law banning the purchase of weapons by persons under the age of 21 (currently the age minimum is 18 years), and restricts access to people with a criminal record or a history of mental illness and domestic violence.

Now the bill goes to the House, where it can be passed later this Friday, and then it will be signed by US President Joe Biden. The new legislation is the most restrictive on the matter to succeed in parliament in about three decades, analysts point out.

The accelerated processing of the issue in two of the three US federal powers shows the degree of tension around the issue. The new law, however, may have less impact on the US public security situation than the Supreme Court decision.

What did the Supreme Court decide?

On behalf of the six judges that make up the current conservative supermajority of the Supreme Court, Judge Clarence Thomas wrote a vote in which he said that the United States Constitution grants citizens of the country the right to carry firearms which he called “di common use “in (like guns) for self defense.

Therefore, the court ruled that a New York law requiring residents to demonstrate “adequate cause” for being able to carry arms in public violates the United States Constitution.

“The constitutional right to bear arms in public in self-defense is not a second-class right, subject to a completely different set of rules from other guarantees,” Judge Clarence Thomas wrote in the majority opinion. “We know of no other constitutional rights that an individual can exercise only after demonstrating to government officials a special need to do so.”

The decision, which undermines similar regulations in states like California and New Jersey, should allow more people to legally carry guns. About a quarter of Americans live in states that could suffer if their own rules, similar to those of New York, are challenged.

The three liberal judges of the court – Elena Kagan, Sonia Sotomayor and Stephen Breyer – voted for dissent, that is, they did not agree with the opinion of the majority. They argued that the court could not ignore the epidemic of massacres that the country faces when it decided on the second amendment to the country’s constitution, the one that guarantees the right to arms for Americans.

In his dissent, Judge Breyer noted that gun violence claimed a significant number of lives in the United States in 2022.

“At the beginning of this year, 277 mass shootings were reported – an average of more than one per day,” Breyer wrote, on behalf of the minority.

He then listed some of the most dramatic cases ever experienced in the country: “Newspapers report mass shootings at an entertainment venue in Philadelphia, Pennsylvania (3 dead and 11 injured); an elementary school in Uvalde, Texas (21 dead) ; a supermarket in Buffalo, New York (10 dead and 3 injured); a spa in Atlanta, Georgia (8 dead); a busy street in Dayton, Ohio (9 dead and 17 injured); a nightclub in Orlando, Florida (50 dead and 53 wounded); a church in Charleston, South Carolina (9 dead); a movie theater in Aurora, Colorado (12 dead and 50 wounded); an elementary school in Newtown, Connecticut (26 dead); and many , many others”.

Thomas, however, rejected the notion that public safety concerns were sufficient reasons to justify gun controls. On the contrary, he said the government must demonstrate “that its firearms regulation is part of the country’s historical tradition” on the subject.

The United States, however, is experiencing a climate of mourning and trauma in the face of the sheer volume of recent serial shooters’ casualties.

This week, ahead of the Supreme Court ruling, the US Senate announced measures for new legislation restricting access to firearms. Lawmakers have tried to build bipartisan support for the rules, despite the deep divisions caused by the issue between Democrats, who are more in favor of restriction, and Republicans, who tend to reject any restriction.

US President Joe Biden said he was “deeply disappointed” by the court’s decision, which he said “contradicts both common sense and the Constitution and should upset everyone.”

New York Mayor Eric Adams said he would review other ways to restrict access to guns, such as tightening the firearms application process and reviewing bans in certain locations.

“We cannot allow New York to become a wild west,” he added.

The National Rifle Association (NRA), on the other hand, celebrated the ruling.

The weapons lobby supported the two plaintiffs in the lawsuit who defied New York law: Robert Nash and Brandon Koch are two New Yorkers who applied for a transportation permit that was denied to them, despite both having recreational weapons licenses.

The United States has more guns in circulation than people in the country. 390 million weapons are owned by civilians, against 329.5 million people. In 2020 alone, more than 45,000 Americans died from gunshot wounds, including homicides and suicides.

The decision on Thursday, June 23, continues a consistent pattern of decisions that have expanded gun rights, believing that the right to carry firearms both in the home and in public is guaranteed by the Second Amendment of the United States Constitution.

Even in the shadow of the mass shootings in Uvalde and Buffalo, a majority of six Supreme Court justices supported a broad interpretation of the Second Amendment first outlined by a narrower majority of the court in 2008.

The latest historic court decision on weapons dates back to 2010, which affirmed the right to bear arms for both state and private entities.

As these judicial precedents build up, it will be increasingly difficult for future Supreme Court judges to change course and interpret the Constitution as allowing wider restrictions on weapons.

Former US President Donald Trump knew his...
Previous articleThe San Paolo victory leaves Ceni relieved: “It shows that Monday’s work was well done”
Next articleCeni defends the job after the victory in the derby: “Do you know the club as I do? You won’t find it”