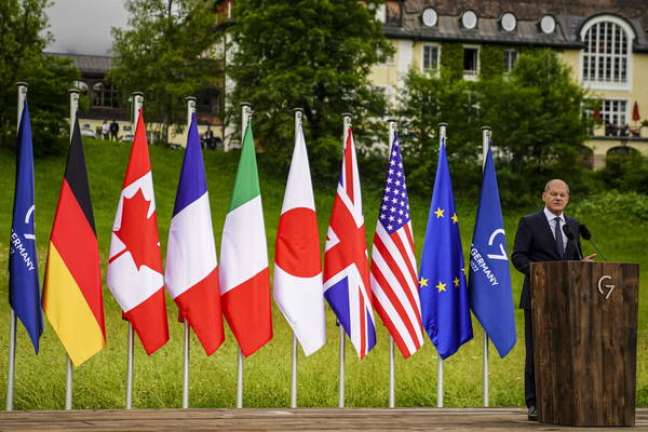 G7 leaders plan to hold an “international conference for the reconstruction of Ukraine” to help the country recover from the war started by Russia in February, the event’s final statement underlines on Tuesday (28) after the meeting at the Castle of Elmau, Germany.

“We are strongly committed to supporting the reconstruction of Ukraine through an international conference,” reads the declaration signed by Germany, Canada, the United States, France, Italy, Japan and the United Kingdom.

The proposal was reinforced by the host of the summit, German Chancellor Olaf Scholz, in the final press conference. According to the head of the Berlin government, “the G7 is on the side of Ukraine in an indestructible way” and it is necessary to create a “Marshall Plan for Kiev” to be rebuilt.

“We are united. [Vladimir] Putin must not win this war and we will continue to hold the price [do conflito] very tall, “he told reporters.

The final statement also accuses Russia of being the main culprit of the “dramatic” food crisis that is affecting the world due to the blockages on the export of Ukrainian cereals by sea.

The leaders are calling on Moscow to “unconditionally end the blockade of Ukrainian ports on the Black Sea” and stop “destroying port transport infrastructure, terminals and grain storage silos” on Ukrainian territory.

“We strongly support Ukraine in the resumption of agricultural exports to world markets, as well as the efforts of the United Nations to unblock a safe maritime corridor across the Black Sea,” they underline.

As a practical action, the G7 pledged an additional $ 4.5 billion to “protect the most vulnerable from hunger and malnutrition, totaling $ 14 billion, as a joint commitment to global food security this year.”

“Russia’s war of aggression against Ukraine, including the blockade of Ukrainian grain export routes, is dramatically exacerbating the food crisis. It has disrupted agricultural production, supply chains and trade and is driving the world price of food and fertilizers at unprecedented levels for which Russia has enormous responsibility, “the leaders add.

The G7 also asked China, the main ally of the Russians, to “put pressure on Russia to stop its military aggression and immediately and unconditionally withdraw its troops from Ukraine”.

The G7 document states that the leaders have decided to create a “climate club” to strengthen and expand cooperation in the fight against climate change.

“We have approved the goals of an international, open and cooperative climate club and will work with partners to establish this by the end of 2022,” reads the final statement.

According to the leaders, the idea is to promote “urgent, ambitious and inclusive action to align pathways at 1.5 ° C and accelerate the implementation of the Paris Agreement”, as well as to engage between nations and l European Union to follow a “highly decarbonised” path by 2030 and “have a completely or predominantly decarbonised energy sector by 2035”.

The G7 also pledged to give “priority” to “concrete and rapid” measures to accelerate the phasing out of electricity from fossil fuels. .

Cologne received the Schalkethis Sunday, and came...
Previous articleRefusal of Russian gas turns Europe into “dirty” energy
Next articleConfidence in the sector grows to its highest level since November, reports FGV