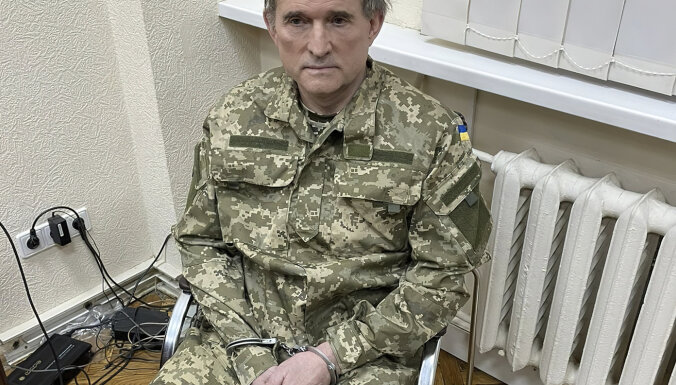 People’s Deputy of Ukraine Viktor Medvedchuk was taken into custody without the possibility of bail. This decision was made by the Lychakivsky district court in Lviv on April 16, after complying with the request of the investigator for particularly important cases of the State Investigation Bureau of Ukraine. Defense policy has the right to appeal the verdict.

The wife of Ukrainian MP Oksana Marchenko offered on the same day in a video message to exchange her husband for two British citizens who fought in Ukraine and were taken prisoner by the Russian side. The woman called on relatives of Britons Aiden Eslin and Sean Pinner to make a request to UK Prime Minister Boris Johnson. In addition, Marchenko appealed to the Crown Prince of Saudi Arabia, Mohammed bin Salman Al Saud, with a request to facilitate the release of her husband.

Viktor Medvedchuk has been under house arrest since May 2021, when he was charged with high treason and attempted “pillage of national resources”. The investigation claims that he was involved in the supply of coal to the self-proclaimed DNR and LNR, and therefore involved in the financing of these “republics”. Three days after the start of the Russian military invasion of Ukraine, Medvedchuk’s escape from house arrest became known.

Until April 12, nothing was known of the whereabouts of the politician; that day, Ukrainian President Volodymyr Zelensky announced the politician’s detention. The Ukrainian Security Service claims that Medvedchuk was arrested on leaving the kyiv region and that his escape was organized by Russian special services. On April 14, the Lychakovsky District Court of Lviv arrested 154 movable and immovable objects of Viktor Medvedchuk and his wife Oksana Marchenko.

Medvedchuk is one of the Kremlin’s main political allies in Ukraine. He himself claims that in 2004 Russian President Vladimir Putin became godfather to his youngest daughter. Medvedchuk’s pro-Russian party “Opposition Platform – For Life” has 44 seats in the Verkhovna Rada. Zelensky announced on March 20 the suspension of party activities for the period of martial law.

The head of state offered to exchange Medvedchuk for Ukrainian prisoners. The Kremlin responded by saying it “does not know” whether the Ukrainian MP himself wants “some kind of Russian participation in resolving this libelous situation against him.”